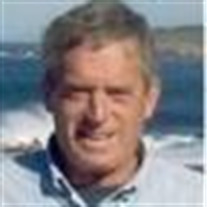 A. L. "Scrap" Lundy III passed away at Mission Terrace, Santa Barbara, CA on June 15, 2017. Scrap was born on November 28, 1938 in Spokane, WA to Kathleen Walsh of Davenport, IA and A. L. Lundy, Jr. of San Francisco. He was the eldest of seven children. In 1957 Scrap graduated from Culver Military Academy and entered Marquette University. He majored in History and was enrolled in the NROTC program. Upon graduation, he was commissioned an ensign in the Navy. After several years, he volunteered for the EOD (Explosive Ordinance Disposal) program. After six months of training, Scrap became a qualified Navy diver and EOD officer. Scrap served in Vietnam in 1965 and 1966 performing EOD diving and related work. Among many stories, he proudly recalled he and his team located and removed a mine from under an U.S. ammunition ship 1 hour 20 minutes prior to a timed detonation. After his honorary discharge from the Navy, Scrap worked for the underwater division of Reading and Bates Offshore Drilling Company of Tulsa, OK. While in Tulsa, he met his future wife Judy. Together they had two children, Leslie (Lulu) and Eric. In late 1967, he moved to Santa Barbara, CA, to work for Cal-Dive, Inc., a commercial diving company. In late 1968, he became a stockbroker with E.F. Hutton. He worked for twenty years as a broker with several local firms. In 1970, Scrap began sport diving at the Channel Islands, and acted as a part-time commercial abalone and sea urchin diver. At this time, rugby entered his busy professional and family life. He continued to play on local teams for 15 years. In 1990, Scrap left the brokerage business to work as a financial advisor to seniors. He did this until he retired in 2009. In 1992, Scrap helped found the Historical Diving Society - USA and served on its board. He was associated with the Cannery Row Foundation in Monterey for years, and served on its board until 2015. During the 1990s, he researched the history of the abalone industry which resulted in the 1998 publishing of California Commercial Abalone Industry - A Pictorial History. Other published works are Real Life on Cannery Row (2008) and Just One More Time (2015). In 1992 Scrap experienced a truly devastating event when his daughter Lulu was diagnosed with a brain tumor. Scrap's hobbies were diving, physical workouts at the SBCC track, shooting at the Winchester Canyon Gun Club, and visiting/reminiscing at the SB Maritime Museum. Scrap was preceded in death by parents, A. Linton and Kathleen Walsh Lundy, his daughter Leslie (Lulu), brothers David, Steve and Tom. Survived by son Eric (Santa Barbara, CA), brother Curtis (Bettendorf, IA), sisters Kathleen (Salt Lake City, UT) and Gabrielle (Seattle, WA), step sons Doug and Jay Jacobs (Ventura) and former wife Judy Walker Lundy (Summerland, CA), and nieces and nephews. A funeral Mass will be held at Our Lady of Mount Carmel Church on Thursday, June 29th at 11am. Memorial donations can be made to the Santa Barbara Maritime Museum.

A. L. "Scrap" Lundy III passed away at Mission Terrace, Santa Barbara, CA on June 15, 2017. Scrap was born on November 28, 1938 in Spokane, WA to Kathleen Walsh of Davenport, IA and A. L. Lundy, Jr. of San Francisco. He was the eldest of seven... View Obituary & Service Information

The family of A.L. "Scrap" Lundy III created this Life Tributes page to make it easy to share your memories.