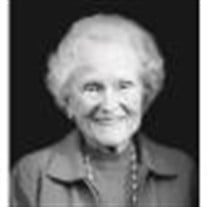 One of the most amazing and gracious women we have ever known, Adabeth Holcombe, passed away peacefully at her home by the sea on September 13th, 2016. She went to meet our Lord Jesus Christ, but left behind her son Roger Holcombe, his wife Cheri, and grand-daughters Janelle and Jerilyn with their families. With them also grieve her son-in-law John Kelly with wife Maureen and grand-daughters Karamee and Jennifer, with her family, in Florida. Adabeth was born in the city of angels on February 13th, 1920. She excelled in art, training at the LA Art Institute and LA City College. Marriage soon followed to her beloved Chet Holcombe, himself a well-respected writer for the Santa Barbara News Press, and while Chet finished his duties in the war Adabeth followed her joy in art. Eventually the two settled in Santa Barbara, Chet writing for the paper and Adabeth illustrating the current fashions for local stores such as Andera's and Penninger's. They both enjoyed the lively camaraderie of the Santa Barbara social scene and were also blessed with two children, Roger and Wendy. Roger loved engineering, created a dynamic career in the field, and continues to pursue his trade across the world. Wendy was a gifted and vivid artist with the same joy her mother had but was sadly taken far too soon, leaving behind her husband John and two young daughters, both gifted with her artistic nature. Adabeth, a beautiful woman with an eye for fashion, had the ability to make anyone who met her feel cherished and welcome. She was gracious and treated everyone with respect. Nicknamed "Scooter," she was known for her fast walking and passion for exploring. Though with family and friends, she would linger to the very end and exclaim "I wish you didn't have to go!" After the passing of her husband, Chet, over 20 years ago, Adabeth continued to develop her love of watercolor painting and began to travel the world. There was barely a continent she did not set her foot on or adventure she did not try, many of them with her dear friend Janet. She filled her life with all things beautiful: family dinners on Sunday night, summer holiday parties on her deck overlooking the ocean, lunch with friends, countless gallery showings with her exquisite paintings, flower arranging and design with Las Floralias, and continued passion for learning. She has shown her family and those blessed to know her how to live life fully and right up to the very end, her vivacity and sense of wonder will be dearly missed by us all. Instead of flowers, donations to Santa Barbara Hospice would be greatly appreciated.

One of the most amazing and gracious women we have ever known, Adabeth Holcombe, passed away peacefully at her home by the sea on September 13th, 2016. She went to meet our Lord Jesus Christ, but left behind her son Roger Holcombe, his wife... View Obituary & Service Information

The family of Adabeth Holcombe created this Life Tributes page to make it easy to share your memories.

One of the most amazing and gracious women we have ever known,...