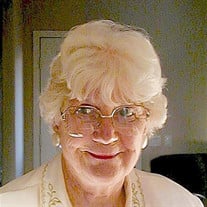 Alberta Rae Pearcy (maiden name: Schmadel), born March 10, 1919, in Lafayette, IN., passed away on October 4th at her home in Goleta, CA, at age 96. Alberta graduated from Purdue University in 1942. She was an accomplished vocalist from a young age. After graduating from Purdue University she studied voice with the world-renown performers Rosa Raisa & Giacomo Rimini at the Chicago Conservatory of Music. During World War II Alberta joined the Red Cross and was sent to India, where she was assigned to Army Special Services and entertained troops throughout CBI theater with the Melvyn Douglas Troupe. After the war Alberta rejoined Army Special Services as the special services director of the Eagle Club in Wiesbaden, Germany. In 1948, while still in Germany Alberta met MSgt James E. (Gene) Pearcy. The next year they married in the Opel Mansion in Wiesbaden. Alberta performed throughout Europe, being in great demand because of her rich and strong coloratura soprano. She also began teaching both piano and voice, an avocation she carried well into her 80’s. Throughout her life Alberta directed many church choirs, youth choruses, and musicals, while performing in operas and musicals such as "Orlando Paladino", “Song of Norway,” “Carousel” and others. After Gene was medically retired from the Air Force, the family settled in Goleta, CA, where Alberta studied with and became a good friend of famed performer and teacher, Madame Ruth Michaelis. After Gene passed away in 1970, Alberta was left alone raising three children. Mother ran the home, taught 20 - 30 private music students a week and for a period of time taught music appreciation at a local high school. When she wasn't teaching she was performing and when she wasn't performing she was preparing for a performance. Somehow she managed to raise us kids and provide for all of our needs, which we feel was her greatest accomplishment. Mother is survived by her three children, Carole, Michael and Brian, and by many grandchildren and great grandchildren. Visitation will be at Welch-Ryce-Haider in Santa Barbara Wednesday afternoon, October 7th from 4PM to 5PM, and will be followed Thursday at 12:30 PM with a service at the Los Angeles National Cemetery, where Alberta will be laid to rest with her husband, Gene.

Alberta Rae Pearcy (maiden name: Schmadel), born March 10, 1919, in Lafayette, IN., passed away on October 4th at her home in Goleta, CA, at age 96. Alberta graduated from Purdue University in 1942. She was an accomplished vocalist from... View Obituary & Service Information

The family of Alberta Rae Pearcy created this Life Tributes page to make it easy to share your memories.