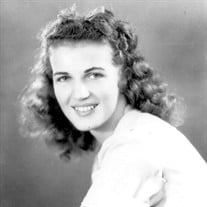 Aloha Wing was a roman candle, a wildflower, an Argonaut, a medal-winning Senior Olympian swimmer in her 70s, and an unrepentant smart aleck. She traveled through life with a disarming laugh and embraced the world with both arms, her innumerable bracelets always jangling noisily. Aloha was, perhaps not surprisingly, born in Hawaii, which in 1923 was not yet a state, but a territory. She was born at Schofield Barracks there; the Army post flattened 17 years later in the Pearl Harbor escapade. Her father, Col Julian Hurlburt Gist, had finally wrangled that dream assignment at an army post in Hawaii, a place that had always held much literary and historical fascination for him. It is fitting that the apple of his eye was born there, baby Aloha joining older siblings Bill, Jeanette and Jean in that island paradise. At her birth in 1923, Aloha was very nearly named Lili`uokalani after Hawaii's last sovereign queen. It was a close call. In 1942 Aloha met Bob at a serviceman's dance in Florida and the game was afoot. Bob is known for, among other things, having introduced himself to his mildly reserved future mother-in-law, Mrs. Arlene Gist, with the words 'Hi, Arlie!" Mrs. Gist reportedly fell for the perpetually grinning serviceman at that moment, as had her smitten daughter. Thanks to the Air Force, Aloha and Bob, marrying in 1943, lived many places, from Puerto Rico to Tripoli, Libya, and gathered about themselves many many friends, and closed many Officer's Clubs on many a Friday and Saturday night. By-the-by, along came Bill, Jill, Jeff and Patrick, each of whom carried into the world Aloha's charmed approach to life. Impossibly, Bob left us in 1993, and now Aloha is gone. Another impossibility. Her last full sentence, two days before she left, was the sung line - "I can't give you anything but love, baby." That says it all. Aloha Wing is preceded in death by her parents, Julian and Arlene Gist, and her loving siblings Jean Gist, Jeanette Arlene McBride Gist, and William Wesley Gist. She is survived by her children Bill (Janet) Wing, Jill Wing, Patrick (Penny) Wing, and Jeff (Judith) Wing, as well as grandchildren Ryan Spencer Kalani Wing, Sam Marcellus McGuane Wing, and Stella Jill Katharina Wing. Services are to be held at Arlington National Cemetery in Arlington, VA, where Aloha and Bob will be united once more. Aloha's Grandfather, William Wesley Gist, a 15 year old 'child soldier' in the Civil War's Union Army, was Presiding Chaplain at the dedication of the Memorial Amphitheater at Arlington in 1920, which adjoins the Tomb of the Unknown Soldier, and we are pleased that Aloha will be nearer this historic emblem of her family's service to our country. The famiy would like to thank Serenity House for their very graciously hosting Aloha and her loved ones during our brief time there, and Welch-Ryce-Haider for their sensitivity and care.

Aloha Wing was a roman candle, a wildflower, an Argonaut, a medal-winning Senior Olympian swimmer in her 70s, and an unrepentant smart aleck. She traveled through life with a disarming laugh and embraced the world with both arms, her innumerable... View Obituary & Service Information

The family of Aloha Patricia Wing created this Life Tributes page to make it easy to share your memories.

Aloha Wing was a roman candle, a wildflower, an Argonaut, a medal-winning...