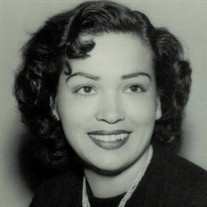 Barbara Arellanes Medel August 4, 1925 – June 7, 2018 On June 7, 2018, our dear mother and “Nana” Barbara Arellanes Medel left this earth peacefully surrounded by her children at the age of 92. Barbara was a 7th generation early Californian whose ancestry dates back to 1732. She was born to her parents Luis Arellanes and Caroline Cota-Arellanes. She was one of six children and grew up on Cota and Olive Street in Santa Barbara. She attended Lincoln School, Santa Barbara Jr. High and Santa Barbara High School. Both of her parents passed away before she reached the age of 16 and she was forced to leave school and begin work to help support herself while her two brothers joined the US Navy in 1941 to serve in the Great World War II. She soon married the love of her life Lucio Medel and moved to Carpinteria where she would spend her remaining 77 years. She had her first two sons (Albert and Kenny) by 1943 just before our father joined the US Navy and was shipped overseas to fight in the war. Dad returned from the war in 1945 and two years later they had their third son (Richie) followed by their fourth son (Bill). In 1953 Barbara had the last of her children giving birth to twin daughters Carolyn and Marilyn. Her six children were the love of her life. She raised her children in a Catholic home surrounded with kindness, love, laughter, music, dancing and plenty of gatherings to celebrate family and friends. Barbara was employed with various jobs over the years including working at the Mutual Lemon Packing House, Catlin Ranch and Jostens, but her greatest gratification was always being a loving mother and a loyal wife. Barbara was a long time parishioner of St. Joseph Catholic Church and a member of the Native Daughters of the Golden West Tierra de Oro Parlor 304. Lucio and Barbara always opened their doors to family and friends and were always willing to put others first before themselves. She was a good cook and took pride making her famous chili verde every Sunday morning and if you invited her to a party you could bet she would be there with a bowl of macaroni salad. She loved to be with family and sing and dance at gatherings. Lucio and Barbara spent their first fourteen years on 7th and Elm Street in Carpinteria before building their family home at Holly Ave. Barbara is preceded in death by husband Lucio, sons Albert and Kenny and her siblings Bill, Edmund, Hank, Charlie and Carmen. Barbara is survived by her devoted children Richard Medel (Patsy), Carpinteria, Bill Medel, Santa Barbara, Carolyn Medel, Carpinteria, Marilyn Medel, Santa Barbara, grandchildren Tommy Medel (Adelina), Michael Medel (Monique), Joseph Gonzalez, Carlina Gonzalez, Cindy Medel and great grandchildren Marissa, Mary Alyssa, Gabriel and William Farr. She is also survived by her very special cousin Lorraine Macias, brother-in-law Eddie Arellano, sister-in-law Josephine Medel Holland and numerous nieces, nephews, compadres and comadres. Special thanks to her caregivers Vira Gonzalez, Maria Vasquez, Tessa Hernandez, Cindy Weber, Dr. Janet Pickthorn, the Visiting Nurses and Hospice Care. God Bless you Mom “Nana”. You are forever in our hearts. Vaya con Dios. In lieu of flowers, donations may be made to St. Joseph Church in Carpinteria and Serenity House of Santa Barbara. Visitation will be held at Welch-Ryce-Haider on Thursday June 14 from 11:00am – 5:00pm. Services will be held at 10:00 am Friday June 15 at St Joseph Catholic Church 1532 Linden Ave. Interment at Carpinteria Cemetery.

The family of Barbara Arellanes Medel created this Life Tributes page to make it easy to share your memories.