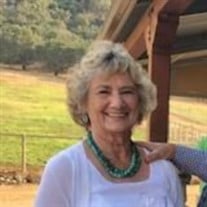 Benita Wilson died on January 30, 2021, surrounded in love by her family. Benita was born Lillian Benita Davis, December 4, 1937, in Jacksonville, Florida to Benjamin Harrison Davis and Mary Alice Mueller. She was the youngest of three. Her sisters, Mary Elizabeth and Harris Lynne, have pre-deceased her. Benita attended school in San Leandro and San Francisco, graduating from Poly High in San Francisco in 1955. Eventually, Benita obtained her Bachelor degree, Summa Cum Laude, in Journalism, from California State University at Northridge. Benita worked for the offices of the Yosemite Park and Curry Company, eventually leading to a job with the Desert Inn and Country Club, first in Las Vegas and then in their San Francisco and Beverly Hills offices. It was while working for the Desert Inn, that she met Reed Wilson, a divorced father of two, Karen and Kim. Reed and Benita were married in 1969, with daughters Karen and Kim at their side. Shortly after, Reed's ex-wife was killed in an automobile accident, and Reed and Benita became instant full-time parents. She put her career on hold to become a full-time mom, settling in Sherman Oaks, where they quickly became part of the community and active in school, Scout and sports activities. In 1987, Reed and Benita moved to Santa Barbara, where she became an involved and successful fund raiser. A life-long animal lover, she was concerned about the number of cats and kittens having to be euthanized at local shelters and helped form the Animal Shelter Assistance Program (ASAP), so that volunteers could help with the care and feeling of animals, and fewer would be euthanized. Benita also competed at the Tennis Club of Santa Barbara, where she organized successful social events. After a lot of positive feedback, she branched out and organized fund-raising events in Santa Barbara for the Tennis Patrons, Las Positas Park and the Music Academy of the West. Benita was also a Board Member of Las Positas Park, and a founding member of the Wildling Nature Museum, originally located in Los Olivos, now in Solvang, CA. Reed and Benita were the center of holidays, as well as family vacations. There were many memorable ski trips with their family to Mammoth. They also traveled extensively as a couple, both for Reed’s employment as well as to major tennis tournaments in the United States, the French Open and, a major highlight, Wimbledon in England. Benita was preceded in death by Reed, her beloved husband of 46 years. He was the light of her life, the love of her life, her soul mate. Her life was never the same without him. Benita is also survived by her daughter, Karen Whipple (Pete) and granddaughter Michelle Benita of Newbury Park; by her daughter Kim White of Arkansas; her grandson Jeffrey Reed Bradley; granddaughter Renee Alice Christie (Ben) and great-granddaughter Millie Reed, and their parents Doug and Donna Bradley of Santa Barbara; by granddaughter Destiny Rose and her parents Debbie and Rod Braly of Paso Robles; by her nieces, Donna Kronin, Alexis Streeter (Larry), Kimberly McGuire (Tom), and Veronica (Roni) Walker (Jane) all of Northern California. She was a loyal friend, loved and beloved. She will be missed by her many friends on the Central Coast and beyond.

Benita Wilson died on January 30, 2021, surrounded in love by her family. Benita was born Lillian Benita Davis, December 4, 1937, in Jacksonville, Florida to Benjamin Harrison Davis and Mary Alice Mueller. She was the youngest of three. Her... View Obituary & Service Information

The family of Benita Wilson created this Life Tributes page to make it easy to share your memories.