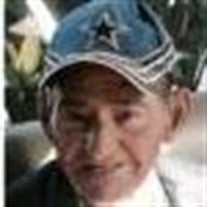 Born on Aug 20, 1926 in Jalisco, Mexico, our sweet, kind father passed away on Dec 8, 2015 at age 89. After immigrating to Santa Barbara, in the early 1950's, he met, and married our mother Louise (Bonazzola), to whom he was married for 49 years, prior to her passing in 2003. He is preceded in death by his daughter Jo Ann as well. Our dad dedicated himself to hard work and his family. His work life began in local restaurants, El Paseo, Blue Onion, and the original Sambo's, where he met our mother. He was the best when it came to BBQ and salsa. Many good times were spent in his backyard, enjoying BBQ and a football or basketball game. He made the transition to the tree care business, which proved to be his natural talent. He is survived by sons, Bernie Jr, Louie and wife Karen, and daughter Rosemary. Grandchildren, Benjamin and wife Ashley, Julia, Gary, Aaron, and Elias. Great-grandchildren, Jacey, Landon, Luke, Alanah, and Kaeden, as well as, sister-in-law, Carol McNamara, nieces Dianna and Melanie McNamara, and cousin Jimmy Alvarez. Funeral Services will be held on Saturday, December 19, 10:00am at Welch-Ryce-Haider Funeral Chapels, 15 East Sola St. followed by interment at Calvary Cemetery.

The family of Bernardo Barragan SR. created this Life Tributes page to make it easy to share your memories.