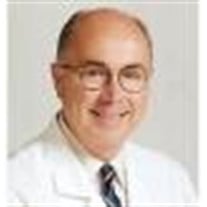 Our beloved husband, father, grandfather and great grandfather, the rock of our family, died May 21 due to complications from Parkinson's disease. Born in Chicago, Illinois to Ethel McHugh and William Gustave Jarchow, Brian attended Loyola Academy and Loyola University, graduating cum laude from Loyola's Stritch School of Medicine in 1953. After graduation, Brian served in the Navy as a physician for a destroyer division on the Pacific during the Korean War. Brian continued his Naval service at Mare Island, San Francisco where he met his wife of 61 years, Mary Therese "Terry" Craig. They were married in 1956 in Albuquerque, New Mexico and soon after, relocated to the Mayo Clinic in Rochester, MN where Brian completed his residency in radiology. His first two children, Therese and Nancy, were born there in 1957 and 1958. Brian's first job brought the family to Los Angeles, CA in 1960 where he worked as a radiologist at St. Vincent's Medical Center. Sons Craig and Brian were born in 1960 and 1962. In 1965, Pueblo Radiology Medical Group, was expanding and asked Brian to join the practice. The family then moved to Santa Barbara where daughter Anne was born in 1966. Brian decided that he would enter the medical field at age 10. He loved his profession and served the medical community in numerous capacities. Most significantly, he was Chief of Staff of St. Francis Medical Center from 1971-1974 and later took on the same role at Santa Ynez Valley Cottage Hospital serving there from 1985-1999. He was a member of the Foundation Boards of both St. Francis Hospital and Santa Ynez Valley Cottage Hospital for many years. He was also a proud member of the Doctor's Mayo Society. Brian retired from full time practice in 1994 and worked part-time for Pueblo Radiology Medical Group until he permanently retired in 2001. Brian was a devout Catholic and long-time member of Our Lady of Mt. Carmel Church and Old Mission Santa Ynez. He was a Knight Commander of the Order of the Holy Sepulcher of Jerusalem, a religious order that sustains and assists the religious, spiritual, charitable and social works of the Catholic church. In 1980, the family purchased a second home in the Santa Ynez Valley, Rancho de la Florecita, moving there permanently in 1991. For over 30 years, Brian and Terry bred, trained and showed Peruvian Paso horses. In 2013 due to failing health, they returned to Santa Barbara as residents of Valle Verde Retirement Community. Brian's family always came first. He is survived by his wife Terry, and his five children, Therese Brown, Nancy Beckstrom (Lee), Craig (Angela), Brian (DeeDee), and Anne Vejvoda (Serge); thirteen grandchildren, Barrett (Katie), Tessa, Andrew (Cacia) and Helen Brown, Katie Muller (Justin) and Leanne Beckstrom, Megan, Brian, Connor and Chad Jarchow, and Jack, Ella, and Luke Vejvoda, and two great-grandchildren. He is also survived by sister-in-laws Maribel Jarchow and Mary Ann Craig and their children and a niece Patricia Thurston. Brian's life will be celebrated at a memorial Mass at Our Lady of Mt. Carmel Church on Friday, May 25th at 10:30 a.m. Donations may be made in Brian's memory to Villa Majella of Santa Barbara.

Our beloved husband, father, grandfather and great grandfather, the rock of our family, died May 21 due to complications from Parkinson's disease. Born in Chicago, Illinois to Ethel McHugh and William Gustave Jarchow, Brian attended Loyola... View Obituary & Service Information

The family of Brian Hugh Jarchow M.D. created this Life Tributes page to make it easy to share your memories.