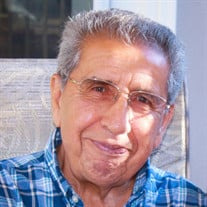 After suffering a lengthy illness, Carlos Fontes passed away peacefully on March 21, 2022. Born on July 2, 1931, into a family of 7 children, he was the third child born to Paulino and Antonia Fontes. He grew up in the Los Angeles area and attended local schools. Two years after graduating from Roosevelt High School, Carlos enlisted in the Air Force and was stationed at Travis Air Force Base in northern CA. While serving in the Air Force, he received a Good Conduct Medal and a National Defense Service Medal. When his 4-year military commitment was complete, he was honorably discharged from service. After serving in the military, Carlos’ work career started out with Pacific Bell climbing poles and worked his way into his own business, and technical writer for a hospital after a long and illustrious career in the communications field. Although he lived in New Jersey and Nevada for a significant period of time, he lived in California for a majority of his life. He had several life goals that he was able to see come to fruition, one of which was his desire to stay healthy and be around for his family for as long as possible. Prior to suffering a debilitating stroke in August 2018, he walked 1.5-2 miles every day. Carlos enjoyed spending time with family, friends and being involved with various traditions and hobbies. He was adventurous, courageous, creative, detail oriented, fiercely independent, industrious, intelligent, loyal, possessed a diligent work ethic and had a good sense of humor. The legacy he left will be felt for a long time to come. He was loved, revered and will be missed by many. He is preceded in death by his wives, Alicia Elena (1st) and Florence (2nd), his parents and 3 brothers and sisters. He is survived by 3 children and 4 granddaughters: Chuck (Gina) Brook; Bobbe (Bob) Jaclyn (Sean), Kristy (Dale); and Andrea (Drew) Alexia, his sister, Anna Marie, as well as numerous extended family members from the Fontes, Almaraz, Dominguez and Godoy family tree branches. A private Celebration of Life with Military Honors and Ocean memorial were held in the Goleta and Santa Barbara areas in April.

After suffering a lengthy illness, Carlos Fontes passed away peacefully on March 21, 2022. Born on July 2, 1931, into a family of 7 children, he was the third child born to Paulino and Antonia Fontes. He grew up in the Los Angeles area and attended... View Obituary & Service Information

The family of Carlos Fontes created this Life Tributes page to make it easy to share your memories.

After suffering a lengthy illness, Carlos Fontes passed away...