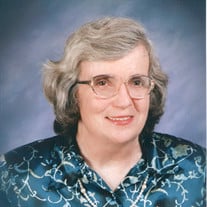 Christie Green, a long-time resident of Santa Barbara, passed away peacefully on July 19th, 2019, surrounded by members of her family, after a prolonged illness. Born Christie Powell in Altadena, CA on July 5, 1941, Christie was the second oldest of eight children. She is survived by her loving husband of almost 59 years, John, her three children, John Green Jr (Christine), Suzie Wells, and Theresa Selman (Michael); four cherished grandchildren: Taryn Wells, Dalton Green, Matthew Selman and Hannah Green; six siblings: Pierce, Joe, Frank, Steve, Barney and Maggie, and numerous nieces and nephews. Christie was predeceased by her parents, Pierce and Anne Powell, and a brother, Vincent. During her working years, Christie became a strong advocate of Catholic education. She was a teacher at San Roque School and Marymount School for many years, and she also taught Religious Education courses to generations of students on a volunteer basis. During her retirement years, Christie held many officer roles with the California chapter of Catholic Daughters of America, and she greatly enjoyed travelling to their annual state and national conventions, and presiding over their scholarship contests. Christie had a lifelong passion for sports and games. Starting at an early age, she was an avid participant, coach and spectator in many different sports. In every endeavor, Christie always prioritized - and sought to instill in others - the importance of good sportsmanship, fair play and respect for one's opponent over the eventual outcome of the game. Christie was issued a rare Lifetime Sports Pass by Bishop Diego High School, allowing her to cheer on her beloved Cardinals through the highs and lows of many seasons in many different sports. Christie always found time to follow Notre Dame sports, as well as teams from many other Catholic universities. In addition to her formal education, capped by the Bachelor's degree she proudly earned at UCSB after raising her three children, Christie believed that travel provided the truest form of education. With family and friends, she travelled to all 50 states and over 50 foreign countries. Each journey was meticulously researched, planned and then archived, and a number of those trips tied into Christie's love of genealogy studies. As a wife, mother, grandmother, teacher and mentor, Christie was greatly admired by all who knew her for her tireless commitment to finding - and then gently fostering - the best qualities in others. Christie's family would like to offer their heartfelt thanks to the wonderful people at Mesa Care for providing a warm and welcoming environment during the last two years of her life. By every definition, she was in excellent hands. Many others gave freely of their time to bring comfort to both Christie and her family, and we are truly grateful to all of them. A Rosary Service will take place at Welch-Ryce-Haider's downtown location (15 E. Sola St.) on Monday, July 29th, at 7:00 p.m. A Funeral Mass will be held at San Roque Church on Tuesday, July 30th at 10:00 a.m. A Burial service will take place following the Mass at Calvary Cemetery, to be followed by a reception. In lieu of flowers, the family suggests that donations may be made to the Christie Green Girls Athletic Scholarship fund at Bishop Diego High School, 4000 La Colina Rd, Santa Barbara, CA 93110.

Christie Green, a long-time resident of Santa Barbara, passed away peacefully on July 19th, 2019, surrounded by members of her family, after a prolonged illness. Born Christie Powell in Altadena, CA on July 5, 1941, Christie was the second... View Obituary & Service Information

The family of Christie Anne Green created this Life Tributes page to make it easy to share your memories.