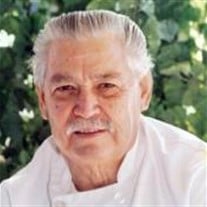 We have lost an amazing, kind and loving man that touched so many lives. He left us peacefully with family surrounding him with continuous love and prayers. He is now with God in Heaven where he will continue to watch over us. Cresenciano, also known as “Chano” and “Joe” was born in the small town of Tenamextlan in Jalisco Mexico and came to the United States at 15 years old for a better life. Joe started working in the agriculture fields across the United States until he began working in the restaurant business in North Hollywood, CA. Quickly proving to be a hard-working and dedicated employee, he became a cook and then worked his way up to become a chef. At the age of 24, he became an entrepreneur by opening his first restaurant in North Hollywood called Casa Roja. At the age of 34, he decided to move to Santa Barbara to raise his new family. He accepted his first position working for Harry Davis who, at the time, owned Joe’s Café. He then was quickly given the opportunity to become the chef of a new venture called Harry’s Plaza Café. Joe was the chef at Harry’s Plaza Café for 22 years under the ownership of Harry Davis and then with Bob Rose. He then retired as a chef the age of 66 but remained active in the restaurant business for a few years just because of his love and passion for it. He truly loved being a chef and was proud of his accomplishments. More so than his accomplishments, Joe was most proud of his family. He was married twice, first to Cleo Reyes and then to Mary Ruelas Vazquez. He is survived by his wife Mary, his brothers: Eliseo; Jose Angel; Jesus; Juan; his sister: Lucrecia, and all 9 of his children: Rita; Franky; Brenda; Teresa; Joseph; Roger; Tony; Albert; and Michael. He will be missed but never forgotten. His love, laughter and great memories will live on forever in our hearts until we meet him again. Memorial Services will take place on Saturday December 3rd 2016, at 12:30pm at Our Lady of Sorrows Catholic Church on 21 E. Sola Street, Santa Barbara, CA, 93101. In lieu of flowers, the family requests to please consider sending a contribution to Garden Court, 1116 De La Vina Street, Santa Barbara, CA, 93101 on behalf of Cresenciano H Vazquez.

We have lost an amazing, kind and loving man that touched so many lives. He left us peacefully with family surrounding him with continuous love and prayers. He is now with God in Heaven where he will continue to watch over us. Cresenciano, also... View Obituary & Service Information

The family of Cresenciano Hernandez Vazquez created this Life Tributes page to make it easy to share your memories.

We have lost an amazing, kind and loving man that touched so...