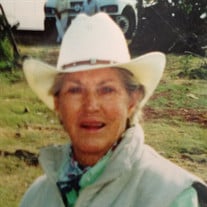 Cynthia Hollister Nagel, affectionately known as Cinnie, died at the age of 84 at her home on June 9, 2014. She left us peacefully in her sleep having been surrounded by her children and her beloved dog. She was born on September 18, 1929 in San Francisco, California to John James Hollister Jr. of Santa Barbara, California and Cynthia Boyd Hollister of San Francisco, California. She spent her earliest years growing up on the Hollister Ranch in Gaviota, California, with her younger brother John James “J.J.” Hollister III and many cousins. At the age of 12 she and her brother and parents moved to the Winchester Canyon in Goleta. Cinnie’s early education was in a one room school house on the Hollister Ranch, with her brother and the other children living on the ranch. She attended, with her beloved cousin Elizabeth, Katherine Branson’s School for Girls in San Rafael, California, as had her mother. She also attended Cal Poly in San Luis Obispo. Cinnie was an avid horsewoman, having been put on a horse before she could walk. She continued to ride and keep a horse into her 80s. Her earliest passions as a young woman were horse and livestock related, with cultural trips to San Francisco to stay with her mother’s family and friends. The early California ranch culture was part of her makeup and it was during one of these ranching gatherings that she was introduced to her first husband, George Allen Masek, of St. Louis, Missouri and Tucson, Arizona. In 1953 she married George and together they had two children: George Allen Masek, Jr. and Cynthia Hollister ‘Holly’ Masek Stahl. Initially they lived in Arizona where Cinnie developed a passion for American Indian Artifacts and made repeated trips to the Navajo Indian Reservations in Northern Arizona. The family moved back to the Winchester Canyon in the early 1960s where she was able to nurture and share with her young children her love of the outdoors, horses, dogs and animals in general. In 1968, she married Dr. Gunther Peter Nagel and they established a beautiful home in Montecito, California, and later retired to Los Olivos, in the Santa Ynez Valley in the late 1990s. Peter brought four children to their life together from his previous marriage to Leinie Shilling: Peter, Victoria, Sophie and Phoebie. Cinnie was happiest outdoors with her horses and dogs, however she also appreciated the arts as experienced in San Francisco. She was a true outdoors woman having been taught fly fishing and bird shooting at an early age by her father, being exposed to the mountains by her mother and uncle, becoming proficient in both English and Western horsemanship, and following a lifelong tradition of appreciating horses and ranching. She was able to accomplish the athletic achievements of Endurance Riding in Santa Barbara County and of Fox Hunting in Ireland. She was an active member of the Sage Hens and the Fillies, both riding groups in the Santa Ynez Valley. She and Peter experienced many years together of backpacking and fishing in the Wind River Range of Wyoming, bird shooting in California and Mexico, and sport fishing in the Tropics and the Pacific. In the 1980s, Cinnie developed a love of the Texas Longhorn Cattle breed and became instrumental in growing the breed in California. She traveled, with her Longhorns, all over the states of California and Nevada, learning and educating others to the merits of her beloved cattle. Cinnie is survived by her brother, J.J. Hollister, of Santa Barbara; her children, George Allen Masek (Ellie) of Marana, Arizona and Holly Stahl (Jim) of Delray Beach, Florida; and her grandson, Jack Stahl. Private services will be held. In lieu of flowers, donations may be made in her honor to the Arroyo Hondo Preserve or a Humane Society of your choice. Arrangements by Welch-Ryce-Haider.

Cynthia Hollister Nagel, affectionately known as Cinnie, died at the age of 84 at her home on June 9, 2014. She left us peacefully in her sleep having been surrounded by her children and her beloved dog. She was born on September 18, 1929 in... View Obituary & Service Information

The family of Cynthia Hollister Nagel created this Life Tributes page to make it easy to share your memories.