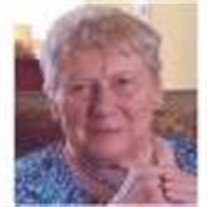 Dolores Shea, a long time resident of Santa Barbara, passed away peacefully in San Luis Obispo on February 23, 2017. She was born and raised in Western Pennsylvania and earned her RN from Mercy Hospital, Pittsburgh in the early fifties. Never a fan of the weather extremes in that part of the country Dolores moved West, first the to pan-handle of Texas before ultimately finding a job at Saint Francis Hospital in Santa Barbara. Dolores quickly learned California suffers from moderate and strong earthquakes and Santa Barbara suffers from gloomy weather in the early Summer. Considering moving again, she luckily accepted a blind date with the son of fellow nurse Ann Shea. Her son, who had recently been discharged from the navy, was looking for a date for the Old Spanish Days festivities in 1952. The date obviously went well as they married in January of 1953. During the following eleven years they welcomed three daughters and two sons and settled in a home in Goleta in which Dolores lived for almost sixty years. After her youngest son entered school she decided to return to nursing. For the next twenty years she again worked for Saint Francis Hospital as well as two private-practice physicians. After retiring Dolores enjoyed doing volunteer work, especially with the Saint Francis Hospital Guild. She remained with them until the Hospital sadly closed. She was lucky to have the time to travel a bit, in 2000 she and Clarke took a wonderful tour of Israel, which she remembered and spoke of for years. She was always by Clarke's side as his health declined, through the surgeries, procedures and doctors' appointments. For one reason or another she didn't accompany him to his final appointment where he collapsed from a massive heart attack. He died the day before what would have been their 54 th wedding anniversary. Dolores' final ten years had been difficult with many health issues, especially her Macular Degeneration, which left her legally blind for many years. The Braille Institute's recorded books program allowed her to continue enjoying books. Early in 2016 Dolores felt she could no longer live safely in her own home. She moved into an assisted living facility in San Luis Obispo near two of her daughters. Unfortunately her health continued to decline. Two of her daughters and her oldest granddaughter were with her when she died. In addition to her five children, Dolores leaves behind six grandchildren and one great grand daughter. A graveside service is planned for 11:30 A.M. on March 11, 2017 at Calvary Cemetery in Santa Barbara.

Dolores Shea, a long time resident of Santa Barbara, passed away peacefully in San Luis Obispo on February 23, 2017. She was born and raised in Western Pennsylvania and earned her RN from Mercy Hospital, Pittsburgh in the early fifties. Never... View Obituary & Service Information

The family of Dolores Self Shea created this Life Tributes page to make it easy to share your memories.