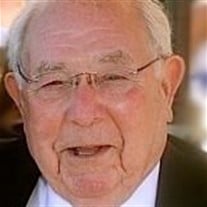 Donald Smith, 85, beloved husband, father and grandfather, died peacefully in Santa Barbara, CA, surrounded by his loving family. Don was born on the family farm near Madison, Missouri to Victor and Gladys Dowdy Smith. After attending a one room rural grammar school, he graduated from Madison High School and attended Hannibal LaGrange College. Between semesters he taught rural grammar school for two years and went on to attend the University of Missouri where he received a Bachelor of Science Degree in Education. He proudly served his country as a Nike guided missile technician in the U.S. Army. After an honorable discharge from the Army, Don attended the University of Missouri Law School where he earned his Juris Doctorate Degree. In 1958 he married the love of his life, Wanda Lee Frazier and together they had three children: Jeffrey, Stephen and Kimberly. After law school, Don worked as a Claims Attorney for Employers Reinsurance Corporation in Kansas City and then moved to Alamosa, Colorado where he maintained a legal practice with his brother John Smith. Don was truly dedicated and devoted to the legal profession as a trial attorney in civil and criminal law, tax and business, real estate, corporate and governmental law. He served as Assistant District Attorney, County Attorney and Town Attorney for small towns within the judicial district. He was appointed District Judge of the 12th Judicial District of Colorado for six counties and Water Judge for Division 3, having exclusive jurisdiction over all water rights for the Rio Grande River Watershed. At that time he was the youngest Judge appointed to the bench in Colorado. His distinguished law career also included president of the local bar association, membership in the Board of Governors Colorado Bar Association, participation at the National College of the State Judiciary; and officer and treasurer of the Southern Colorado Economic District. He was admitted to practice law in Missouri, Colorado and California. Together with his brother John, he owned and operated Skyview Cooling Company, a successful and innovative produce growing, packing and shipping company with facilities in Colorado, New Mexico, Arizona, California and Mexico. Don retired from the bench in 1976 and moved the family to Santa Barbara, CA while continuing his work with Skyview Cooling. In 1989 he sold his interest in the business so he could devote all of his time and energy to his family. Don loved his wife and family first and foremost; he also enjoyed golf, genealogy, travel, boating, spending time with his friends at the Santa Barbara Club, La Cumbre Country Club, and at the family home in Lake Tahoe. He was an avid stamp and coin collector. His wit, generosity, wisdom, wholehearted embrace of life and enduring sense of humor will be missed always and forever. He is survived by his devoted wife of 58 years, Wanda, and their 3 children: Jeffrey (Monique), Stephen (Maria), and Kimberly (Gary), his two grandchildren Braden and Tanner Smith, and step-grandchildren Brittany, Ashlee, Tiffany and Camryn Siegel. He was predeceased by his parents and two brothers, Robert G. Smith and John B. Smith. A celebration of Don’s life will be held October 15, 2017 at the Santa Barbara Club from 2:00 – 4:00 pm. In lieu of flowers, donations may be made to the Cancer Center of Santa Barbara, 601 West Junipero Street, Santa Barbara, CA 93105 (ccsb.org) in honor of Donald Smith.

Donald Smith, 85, beloved husband, father and grandfather, died peacefully in Santa Barbara, CA, surrounded by his loving family. Don was born on the family farm near Madison, Missouri to Victor and Gladys Dowdy Smith. After attending a one... View Obituary & Service Information

The family of Donald G. Smith created this Life Tributes page to make it easy to share your memories.