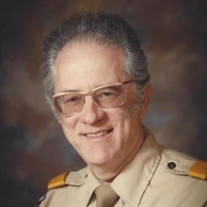 Born in Milwaukee, Wisconsin, to Edmund P. and Josephine Barbeau (Radl), Ed was preceded in death by his beloved spouse of 54 years, Madeline Lucille Barbeau (Sueflohn) and by his sisters, Ruth Schmidt and Hilda Hagen. He is survived by 11 children and their spouses , Shelley Fridell (Richard), Mary Jo Barbeau (Frank Mariani), Marcia Christofferson (Mike), Mike Barbeau (Kathy), Marty Barbeau (Silvia Gomez), Marc Barbeau (Lori), Meg Ramirez (Albert), Mia Barbeau, Ellyn Ferguson (Duane), Eric Barbeau, and Brad Barbeau (Karen Buehlman); also by 15 grandchildren, and 11 great-grandchildren. Ed brought his family from Milwaukee to Santa Barbara in 1972. A graduate of Marquette University with a master’s degree in engineering, he was employed by Delco Electronics until his retirement, taking an active part in designing guidance systems for NASA’s space program. He was especially proud to have been involved in the Apollo missions and the moon landing. He was active in the Boy Scouts of America Los Padres Council, particularly the Catholic Committee on Scouting, and he was a proud recipient of Scouting’s Silver Beaver Award for distinguished service to BSA at the council level. He was also a solo practitioner in a tax preparation business, Beautax, and was a member of St. Raphael’s Parish in Goleta. Ed and Madeline sold their sprawling house in Santa Barbara and relocated to Santa Maria in 2001, dividing the year between winters in Santa Maria and summers in the northwoods of Wisconsin until Madeline’s death in 2005. After their move, they joined St. Louis de Montfort Parish in Santa Maria where Ed sang in the choir, blending his tenor voice with those of fellow members during worship services on Sunday mornings. A Visitation will be held at Welch-Ryce-Haider Funeral Chapel in Goleta, California on November 7, 2019 from 11:00 to 12:00pm, with a Funeral Service at 12:00 pm., following which Ed will be laid to rest next to Madeline at Calvary Cemetery, Santa Barbara, California. In lieu of flowers, the family suggests that gifts be directed to the Boy Scouts of America in Ed’s name. The family wishes to thank the caregivers at Santa Maria Terrace and especially Megan from Central Coast Hospice for their excellent care of Ed in his last days.

Born in Milwaukee, Wisconsin, to Edmund P. and Josephine Barbeau (Radl), Ed was preceded in death by his beloved spouse of 54 years, Madeline Lucille Barbeau (Sueflohn) and by his sisters, Ruth Schmidt and Hilda Hagen. He is survived by 11 children... View Obituary & Service Information

The family of Edmund A. Barbeau created this Life Tributes page to make it easy to share your memories.

Born in Milwaukee, Wisconsin, to Edmund P. and Josephine Barbeau...