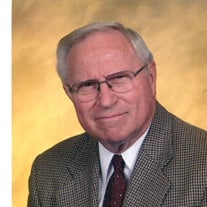 Edward Lee Hayes passed from this life to the next on November 20, 2017 at the age of 86. He was born on September 26, 1931, the fourth son of George Lester and Sylvia Hayes, and grew up on a peach farm near Modesto, California. He attended a 2 room country school and went on to graduate from Modesto High School where he was active in student government, track, and art. In 1949 he won a full scholarship to the California School of Fine Arts in San Francisco, but chose instead to pursue a liberal arts education at Westmont College in Santa Barbara. While there, he met his future wife, Marilyn, and after his graduation they were married. Ed went on to graduate school at Dallas Theological Seminary, and after a teaching position at then Biola College, began his tenure at Denver Seminary where he served as professor and dean until 1979. During this time he received his Ph.D. in Higher Education from the University of Denver in 1966. The Mount Hermon Association called him to lead that historical and influential center as Executive Director from 1979-1992. Before his retirement in 1997 in Santa Barbara he served again at Denver Seminary as its fourth president. The last twenty years of his life were blessed with many family reunions, travels to over 70 countries, serving on boards, and not least-volunteering as a docent at Lotusland in Montecito for nearly fifteen years. Those who knew Ed Hayes best called him a Renaissance Man. Throughout his life of ministry he wore many hats: artist, writer, botanist, world traveler, educator, friend, beloved husband, devoted dad and grandpa. Most of all he was a dedicated Christian, who, in a chapel talk at the Seminary in 1992, said, "Personally, you're looking at a Christian who wants to end up his life with integrity." We think he accomplished his goal. He is survived by his wife of 63 years, Marilyn, daughter Carla Strickfaden (Jeff), son Darryl (Jill), and son Bryan (Patty); six grandchildren, Kevin Strickfaden (Sophia), Emily Strickfaden, twins Mark and Eric Hayes, and Kristin and Carter Hayes. His two older brothers, Harold and Raymond, and many nieces and nephews mourn his passing as well. He was preceded in death by his parents and sister, Lois. In lieu of flowers, memorial gifts may be made to Mount Hermon Book of Remembrance, PO Box 413, Mount Hermon, CA 95041 or the El Montecito Presbyterian Church. Celebration of Life service at El Montecito Presbyterian Church on January 6 at 2 P.M

Edward Lee Hayes passed from this life to the next on November 20, 2017 at the age of 86. He was born on September 26, 1931, the fourth son of George Lester and Sylvia Hayes, and grew up on a peach farm near Modesto, California. He attended... View Obituary & Service Information

The family of Edward Lee Hayes created this Life Tributes page to make it easy to share your memories.

Edward Lee Hayes passed from this life to the next on November...