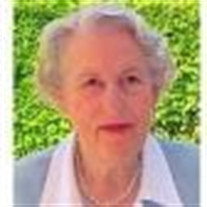 Elaine June Iddings passed away on March 18, 2017 at the age of 95. She was preceded in death by her beloved husband of 69 years, Harry G. Iddings Jr. She is survived by their 3 children: Helen of Hayward, CA; Bruce and his wife Rachel of Bakersfield, CA; David and his wife Helen of Indianapolis, IN; 9 grandchildren, 14 great grandchildren, 2 great great grandchildren and numerous nieces and nephews. Elaine was born on July 16, 1921 in Missouri. She was the third daughter born to Grover Geyer and Myrtle Hornbeck Geyer. Both of her sisters, Elnora Geyer and Helen Geyer McIlvried preceded her in death. Elaine attended Purdue and graduated in Dec. 1942 with a BS and a teaching credential. The day of graduation, she married her high school and college sweetheart Harry and they caught a train to Washington, DC where he served his active military duty. There she worked as a reference librarian at the Library of Congress. After the war with their baby daughter, they moved to Buffalo, NY where both sons were born. Subsequent moves took them briefly to Long Island and Alexandria, Virginia and in 1960 to Santa Barbara. Elaine worked for the county of Santa Barbara for 20 years, from 1966 to 1986, during which time she earned a Masters of Public Administration from University of Southern California. She was Director of Volunteer Services and then Assistant to the Hospital Administrator of Santa Barbara County Hospital. She then moved to the Road Department in 1980 as an accountant. A firm believer in contributing to her community she did volunteer work with a number of organizations including the Mental Health Association and Children's Home Society. She served on the Santa Barbara County grand jury and was president of the Santa Barbara chapter of the League of Women Voters. In 1966 she was the first woman to be elected to the Board of Directors of the Santa Barbara Chamber of Commerce. Her favorite hobbies were sailing, succulent gardening, playing bridge and potting. For many years she played bridge regularly with the Santa Barbara Yacht Club women and used her artistic talents as a potter to make ceramic bowls for Empty Bowl, an annual fund raising event for the S.B. County food bank. There will be a Celebration of Life on Saturday, April 1st at Valle Verde's Roy Schneider Social Room, 900 Calle de los Amigos, Santa Barbara. In lieu of flowers please consider memorial gifts to the Food Bank of Santa Barbara County.

Elaine June Iddings passed away on March 18, 2017 at the age of 95. She was preceded in death by her beloved husband of 69 years, Harry G. Iddings Jr. She is survived by their 3 children: Helen of Hayward, CA; Bruce and his wife Rachel of Bakersfield,... View Obituary & Service Information

The family of Elaine June Iddings created this Life Tributes page to make it easy to share your memories.