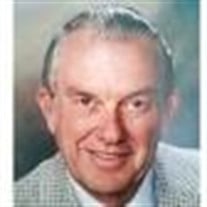 On July 7, 2018, the long, principled and accomplished life of ELDON FORD came full circle, having passed of natural causes in his beloved Santa Barbara, the place of his birth. In the intervening 91 well lived years, Eldon found family fulfillment, athletic glory, academic honor, and professional success. Born January 17, 1927, Eldon was the sole child of Eldon Ford, Sr., the former Assistant and Acting Superintendent of the Santa Barbara School District, and Grace Gooch Ford, a member of the family that introduced Valencia oranges to Southern California and began the Sunkist Cooperative. Attending Santa Barbara schools, he proudly graduated with Honors as a "Don" from Santa Barbara High School in 1944 before joining the military for the conclusion of WWII. Under the Officers' Training Program, he studied engineering at the University of Idaho and University of West Virginia. He was invited to continue his studies at Cal Tech in association with the group that eventually would become the core element of the NASA Space Program, but declined in order to continue his Business studies at UCSB and the University of California at Berkeley, where he was an Honors Scholar, Phi Beta Kappa recipient, and a Rhodes Scholar candidate. Throughout his life, Eldon was an avid and nationally recognized tennis player. Though he graduated from SBHS with Letters in tennis, basketball and golf, tennis was the highlight of his athletic career, leading the Dons to the State Championship in 1942 as well as winning the State Championship in both singles and doubles. That same year, he won the Dudley Cup, the prestigious Ojai Valley and Los Angeles Tennis Club Tournaments, and was invited to the National Championships in Chicago. Because his parents (quite rationally, as he would later agree!) wouldn't allow their underage son to travel that distance during the War, he lost a chance to achieve a national ranking. However, he would later obtain national ranking in doubles, playing well into his 80s. He famously recounted beating Pancho Gonzales twice, and was recognized with Pancho as a Past Champion at the anniversary celebration of the LATC. As he grew older, tennis for him became more of a fully appreciated social activity, playing regularly with numerous new and old friends in Santa Barbara, particularly including the "rambunctious" group of men and women at La Cumbre Country Club who kept him on his toes athletically, politically and humorously! "Big E" (as he was affectionately known in some tennis circles!) remained a stalwart supporter of the UCSB and SBHS tennis programs, and worked to develop public tennis at Elings Park. In 2017, he was inducted into the SBHS Athletic Hall of Fame and proudly (and some thought, fittingly!) wore his 75 year old Don's letterman sweater! In 1954, Eldon became a CPA, entering the profession that would define the next half century of his life. Guided by personal integrity, professional ethics and the retention of absolute client trust, Eldon helped and served countless clients to assess and manage their financial and accounting affairs, and remained to the end a trusted advisor and friend of many, for which he took great pride. He also prized his relationships with his partners and staff over the years in the firm which eventually became known as Ford, Reed and MimMack, CPAs, of Tustin, CA. Though he led an exemplary life in all respects, absolutely nothing matched the exalted height and import that his family held in his heart and memory. Marrying the former Frances Dyas in Santa Barbara in 1948, Eldon and Fran celebrated 61 years together in a diverse and fully lived life, enjoying numerous friendships, social and family gatherings, and extensive travel. Until her passing in 2009, Fran brought warmth, compassion and loads of hearty laughter to his life, as they proudly raised three successful and energetic sons, Bob, David and Doug, and enthusiastically relished and supported their life choices and achievements. Eldon exemplified and instilled in his sons the old adage that one should always strive for perfection in all avenues of life, but joyously accept and share "mere excellence"; luckily for the boys, their Mother would often remind them that if "perfection/excellence" were not achievable, their best and earnest efforts to that end always were! Surviving Eldon are his sons, Bob (and Sybil) of Eugene, David (and Kitri) of Bend, and Doug (and Sloane) of Santa Barbara, five grandchildren (Seth, Joel [and Shannon], Paige [and Justin], Josie, and Michaela) , and four (and soon to be five!) great-grandchildren (Posey, Ada, Ellis and Arlo), as well as his closest friend and supportive companion over the past eight years, Joanne Freeman, and his most loyal and reliable assistant of the last 12 years, Sally Padilla. In his honor, an informal gathering of family and friends will be held on Saturday, July, 28, 2018, from 1-3 PM at the La Cumbre Country Club to celebrate Eldon's illustrious life and to tip a GandT in his honor! All who have been impacted by the life of this uniquely special individual are welcome!

On July 7, 2018, the long, principled and accomplished life of ELDON FORD came full circle, having passed of natural causes in his beloved Santa Barbara, the place of his birth. In the intervening 91 well lived years, Eldon found family fulfillment,... View Obituary & Service Information

The family of Eldon Ford created this Life Tributes page to make it easy to share your memories.