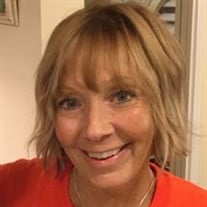 April 1, 1953-July 25, 2016 Elizabeth went to her eternal reward from Serenity House at the age of 63. She was first diagnosed with breast cancer 27 years ago, and in 2002 it became Stage 4 metastatic breast cancer. But she went on to surpass that challenge and baffled the medical community for the next 14 years. She lived to enjoy the high school and college graduations of her son and daughter, and layer celebrated her daughter's wedding in 2014. And, even more improbable, Liz won the President's Cup of the Santa Barbara Municipal Women's Golf League in 2013. Her name is engraved on the trophy in the pro shop's display case for posterity and in testimony to her fighting spirit. Even during the trying times of her medical treatments, Liz devoted much of her time to volunteer activities. The Santa Barbara International Film Festival was one of her favorite annual events and she was there to help in any capacity asked of her. She was there in her red blazer to greet cruise ship visitors with suggestions for an enjoyable time visiting Santa Barbara attractions. And she was tremendously grateful to the Breast Cancer Resource Center for the physical, moral and spiritual support that enabled her to live life to the fullest. She was there to give back, offering help with fund raisers, counseling women trying to deal with their situations, and even modeling fashions on the runway for the BCRC cause. Liz was preceded in death by her parents, Phyllis (Peg) and Richard (Dick) Strong, her brothers David, Steven and Richard, and her nephew Richard. She is survived by her husband of 30 years, John, her children Summer (husband Andrew Casey) and Thomas, her stepson Michael, her nephews Richard, Jon, Eric, Lucas and Thomas, and her nieces Erika and Moira. A Funeral Mass will be held at Old Mission Santa Barbara at 2201 Laguna Street on Friday, July 29, 2016 at 11:00am, followed by a reception in the Parish Hall. In lieu of flowers, please consider a contribution to the Breast Cancer Resource Center of Santa Barbara. It was the anchor for Liz's determination to enjoy every day and face the future with courage.

April 1, 1953-July 25, 2016 Elizabeth went to her eternal reward from Serenity House at the age of 63. She was first diagnosed with breast cancer 27 years ago, and in 2002 it became Stage 4 metastatic breast cancer. But she went on to surpass... View Obituary & Service Information

The family of Elizabeth Ann Sekula created this Life Tributes page to make it easy to share your memories.

Elizabeth went to her eternal reward...