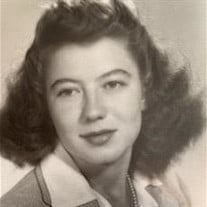 Obituary for Elizabeth (Betty) G. Wells On January 21, 2019, Elizabeth (Betty) G. Wells passed away at the age of 96. She will be remembered and missed for her kind, thoughtful and generous spirit as well as her keen intellect. Born May 29, 1922 in Chicago, Illinois, Elizabeth Pherba Graham was the oldest child of Thomas Julian Graham, Sr. and Clara Alexima Peters. She had one brother, Thomas Julian Graham, Jr. Growing up, Betty lived with her family primarily in New Orleans, Louisiana, and Orlando, Florida. When she began college, the Grahams moved to Des Moines, Iowa, so that she could attend Drake University. Later, the family returned to Florida, where she earned a B.A. degree at the University of Miami in Coral Gables in 1944. She also attended Newman School of Art in Orlando, Florida, and worked in Miami as a commercial artist for Richards’ Department Store, creating fashion drawings for newspaper ads. It was while in Des Moines that Betty met James (Jim) Harvey Wells. They were married in 1945, not long before the end of World War II. Jim served in the U.S. Navy as a medical officer, and together he and Betty were stationed in Indianapolis, Indiana (where their daughter Amy was born); Parris Island Marine Corps Recruit Depot, South Carolina; Walter Reed National Medical Center in Bethesda, Maryland; and Yokosuka, Japan. When Jim completed his military service, they returned to Indianapolis, where their son James was born. The family settled in Santa Barbara, California, in 1958. In later years, Betty and Jim spent many happy times in Hawaii. At the time of her death, they had been married for 73 years. Betty maintained many connections with people across the country. She loved remembering milestones for family and friends with cards and gifts. Intellectually curious, she was interested in history, arts and sciences and enjoyed sharing her large library of books and interesting newspaper clippings. Having experienced the Great Depression and the era of the Greatest Generation, Betty was very patriotic and proud of the military service of her husband, brother (a World War II combat veteran) and father (a World War I combat veteran). Betty is survived by her husband James Harvey Wells, son James Graham Wells, daughter Amy Graham Wells Graham and son-in-law John Louis Graham. Memorial donations may be given to the Veterans of Foreign Wars Foundation (www.vfw.org) or the Volcano Art Center in Volcano, Hawaii (www.volcanoartcenter.org). A memorial service will be held on Thursday, February 28, at 2:30 p.m. at Welch-Ryce-Haider Memorial Chapel (Downtown), 15 E. Sola St., Santa Barbara, California.

The family of Elizabeth "Betty" G. Wells created this Life Tributes page to make it easy to share your memories.