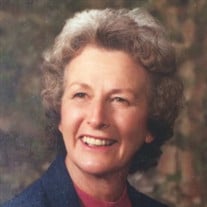 Emma L. McCloskey Jackson November 24, 1925 – November 29, 2015 Emalu Nero was born November 24, 1925, in Houston, Texas, to parents Walter and Jeannette Nero, and was raised in Bottineau, North Dakota. She graduated from Bottineau High School (1943) and then the North Dakota School of Forestry (1945), and the University of Minnesota (1948). She became a registered nurse and was a private nurse and general nurse at General Hospital of Minneapolis and St. Andrews in Bottineau until she entered the Navy Nurse Corps in 1949. Emalu served at Oakland Naval Hospital until she met and married Lt. Donald V. McCloskey in 1951. Emalu and Don raised five children. The family lived at several Marine bases throughout the years, including Bangkok, Thailand. When Don retired from the Marine Corps, the family settled in Don’s hometown of Santa Barbara. Emalu (nicknamed “Lou”) was a member of the Hadas Madrinas in Santa Barbara (an auxiliary of the Easter Seals Society) and the Pink Ladies of Cottage Hospital. After Don’s death in 1977, Emalu was employed by the Santa Barbara Visiting Nurses Association until 1983 and then retired to her cottage at Lake Metigoshe in North Dakota. In the 1990’s Emalu remarried and relocated to Mesa, Arizona, and then Ventura, California, in order to be closer to her children in California. Emalu is survived by her five children: Kate Ford, Elizabeth McCloskey, Don McCloskey and his wife Rosa, Bill McCloskey and his wife Kari, and Caroline Rosen and her husband Rich. She also leaves behind nine grandchildren and seven great grandchildren, as well as ten nieces and nephews. Emalu was preceded in death by husband Don, her parents, her four brothers Walter, Clark, Mark, and Bill, and second husband John Jackson. Friends may remember the Visiting Nurse and Hospice Care of Santa Barbara http://www.vnhcsb.org/ and the Good Samaritan Society in Bottineau http://www.good-sam.com/index.php/locations/bottineau Funeral services are as follows:

The family of Emma L. Jackson created this Life Tributes page to make it easy to share your memories.