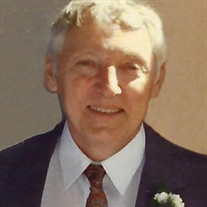 Ernie Pratt was born to Minnie Alice (Bair) and Donald Cole Pratt in Soldier Kentucky on March 25, 1925. The family moved to Detroit Michigan while he was in grade school. After graduating high school in 1943 he joined the Army Air Corp where he became addicted to black coffee but also became a gunner on a B-17 stationed in Italy and found himself a crewmember on the last European bombing mission of the war on April 25th, 1945. While awaiting discharge from the Air Corp he met Louise Plummer at the Army air base in Santa Ana, California. In September Louise accompanied him upon his return to Detroit and they were married on May 17, 1946. Having had enough of Detroit winters they moved to the Los Angeles area in 1948 where he became a surveyor for the Southern California Gas Company. Ernie’s first son David was born in 1949 and a daughter Valerie followed in 1951 with another son Mark arriving in 1954. Suffering terribly from allergies to the suffocating smog enveloping Los Angeles he finally couldn’t take it anymore, and in March of 1956 loaded his possessions into a trailer and drove the family to Portland Oregon for a fresh start. Initially he worked for the Portland Gas & Coke Company, but soon became employed as a draftsman by Portland General Electric. Near the end of 1963 Ernie was enticed by an offer from Louise’s aunt Virginia to manage Gold Hill Builder’s Supply owned by her and located in southern Oregon, so the family moved to Gold Hill. It didn’t take long for him to figure out the supply company was a scam after which he became employed by Southern Oregon Title Company. Then, as happens in many marriages, things fell apart and he and Louise divorced in the summer of 1965. By the end of the year he had moved to Santa Barbara where his (also now divorced) mother owned a house with a rental duplex next door. After a short stint as a draftsman at the Homestake Oil Company he became employed by the City of Santa Barbara as a title search specialist. In 1966 while playing the part of a sailor in the production of South Pacific put on by the Alhecama Players he met Sheila Cruickshank. One thing led to another and they were wed on May 27th, 1967. In the meantime Ernie had moved over to the County of Santa Barbara as a Real Property Agent. He and Sheila settled into the house on the Mesa that she and her mother had purchased in 1952. He subsequently spent many years enjoying the good life drinking endless cups of coffee with his numerous friends and as an active member of the First Congregational Church of Santa Barbara. Ernie retired from the County of Santa Barbara in the early ‘90s and Sheila retired from her Administrative Assistant position at UCSB soon after. Sheila passed away at the age of 83 in 2010 leaving Ernie and his beloved cat Jimmi to hold down the fort, which he did until passing away at home on February 12, 2022 at the age of 96. Interred alongside Shelia in the Montecito Urn Garden at the Santa Barbara Cemetery on Channel Drive, he requests that anyone visiting his gravesite not bring flowers but rather a cup of coffee.

Ernie Pratt was born to Minnie Alice (Bair) and Donald Cole Pratt in Soldier Kentucky on March 25, 1925. The family moved to Detroit Michigan while he was in grade school. After graduating high school in 1943 he joined the Army Air Corp where... View Obituary & Service Information

The family of Ernest Clell Pratt created this Life Tributes page to make it easy to share your memories.