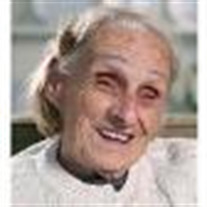 May 26, 2017 Eva Castagnola Bregante of Santa Barbara, CA passed away after a month-long battle with complications from a broken hip. She was 103 years old. In her last weeks, she was almost always in the company of her children, grandchildren and great grandchildren. She passed away peacefully on May 17, 2017 at Serenity House in Santa Barbara. The private graveside funeral service was attended by family and close friends on May 26, 2017 at Calvary Cemetery in Santa Barbara, CA. Funeral arrangements were handled by Welch-Ryce-Raider Funeral Chapels of Santa Barbara. Eva Angelina Castagnola was born March 30, 1914 in Santa Barbara, California, one of eleven (11) children to Cesira (Ghio) and Salvatore Castagnola of the Santa Barbara Castagnola fishing family. At 103 years of age, she was the last surviving member of her generation. Her younger brother, Italo (Sonny) Castagnola predeceased her last month. Also, predeceasing her were her 6 other brothers (Baptisto, Albert, Victor, Lawrence, Dario, George and Americo), along with her two sisters: Mary Acquistapace and Della Malengo. Eva was also predeceased in death by her husband, Joseph Bregante and one of her twin sons, Ronald Bregante, who died at the age of 21 from cancer. Eva is survived by seven of her eight children: George J Bregante, David Bregante, Tom Bregante, Diane Bregante Carter, Donald Bregante, Larry Bregante and her daughter and caretaker for the past 24 years, Lorraine Bregante. Her surviving 10 grandchildren include: Charla Bregante of Goleta, Daria Laudeman of La Crescenta, Gina Pritchard of Buellton, Sonia Moore of Ventura, Lia Bregante and Joseph Bregante of Santa Barbara, Sean Carter of Malibu, Alana Hughes of Cherry Valley, Alisa Russell of Banning and Andrea Gomez of Simi Valley. Eva's 10 great grandchildren include: Kathryn and Erich Laudeman of La Crescenta, Frances and Miles Kretschmer of Goleta, Gabriel Carter of Malibu, Mateo Gomez of Simi Valley, and Oshen, Sol, Stone and River Hughes of Cherry Valley. Life in a smaller Santa Barbara was much simpler during Eva's childhood. Being one of three girls in a family of eight brothers, the division of labor was clearly defined: The boys were to learn, tend to and grow the family's fishing business. The girls were relegated to cleaning, cooking and helping their mother and father with chores. Eva's mother was an excellent cook and she taught her daughters well. Eva also loved to spend time with her father. From him she learned how to mend fishing nets and make lobster traps. She also helped him make homemade wine. Eva and her siblings all loved the ocean and regularly went to the beach at the ocean end of Santa Barbara street. Social life was simpler too. As young adults, they used to play baseball in the street in front of their home and sit on the front porch, talking among themselves and to people who walked by. Eva met Joseph Bregante on such an afternoon, while she played baseball in the street with her brothers and sisters. He was the outgoing one and started a conversation with her. The rest is history. They married in the mission church in Ventura, traveling along the ocean front wooden roadway that is now Highway 101. After 103 years, how many people can say they cared for, touched and loved over a thousand children? While raising her own eight children, Eva began babysitting to supplement the family income. In 1960, she opened a home day care business in her Eastside home where she cared for as many as 15 children at a time, including many of her grandchildren. Children who spent their early years in Eva's care still remember her homemade turkey soup, "green" spaghetti, long driveway perfect for tricycles, and her firm but loving care. As a young adult, Eva's youngest daughter Lorraine Bregante began assisting her in the day care. As the years went by, their roles eventually reversed, with Eva assisting Lorraine by feeding and holding babies until she was over 100 years old. Eva and Lorraine provided loving care to generations of Santa Barbara pre-school children for over 50 years. With Eva's passing, Lorraine has closed their day care business for good. Eva lived a simple life. Above all, she valued family and hard work. She was happiest in her beautiful garden, planting and tending flowers with as much care as she tended children. She loved the beach, and spending Sunday afternoons with her two sisters sharing family gossip. She brought her Italian heritage to holidays with her homemade ravioli and gnocchi, and she retained the Castagnola family's love of the ocean her entire life. Eva taught by example, raising her children to appreciate the value of hard work, the importance of family, and the worth of all people, regardless of race, religion or economic standing. Her children, grandchildren, great-grandchildren, and all the children she cared for over the years loved her in return. She regularly received messages of gratitude from the families she cared for, and her children still meet people who grew up in her daycare. She eased the worry of many a working mother, knowing that their children where in Eva's loving care. While Eva is more than worthy of a front row seat at "The Kennedy Center Honors", she was a humble woman who preferred the front row seat of her own living room sofa or a patio chair in the sun in her garden, surrounded by the sounds of children playing. She will be greatly missed by all whose lives she touched. "For us humans, our mother is a never-ending song in our hearts of comfort, happiness, and well-being. We may sometimes forget the words but we always remember the tune." "Mom, we loved you then. we love you still. we always have. we always will."

May 26, 2017 Eva Castagnola Bregante of Santa Barbara, CA passed away after a month-long battle with complications from a broken hip. She was 103 years old. In her last weeks, she was almost always in the company of her children, grandchildren... View Obituary & Service Information

The family of Eva Bregante created this Life Tributes page to make it easy to share your memories.