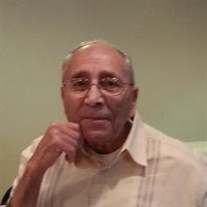 Fernando (Fred) Avila (83) was called home to his Lord and Savior, Jesus Christ on October 30, 2017, surrounded by his loving family. He joins his Wife, Lydia Avila,in Heaven. Born in Santa Barbara, California, Fred and family moved to Decoto, California, where in High School, he was an All-Star Athlete in Basketball, Baseball, Football, Track and Boxing, setting many school records. In 1952, Fred joined the United States Marines, during the height of the Korean Conflict. He had many stories of being in combat, and many a close call with the enemy. After his Honorable Discharge, Fred moved back to Santa Barbara. There he met the love of his life Lydia Acosta and they were married for 54 years. He worked for the City of Santa Barbara for 37 years and became the Auto Shop Supervisor for the majority of his career and became a Certified Master Mechanic. He was very proud that not one Police Car or Fire Engine ever had to be towed when under his watch. He worked three jobs for several years supporting his family, including fixing cars for friends and relatives and restoring Hot Rods. Cars were Fred’s second love. He was also a Black belt in Karate. Fred and Lydia were devout Catholics, being very active in their Church and Bible Study. They were involved with feeding the homeless of Santa Barbara for over 20 years. He is survived by his daughters, Lydia Avila, Diana Avila-Justesen (Patrick), Delphina Avila; Son, James Avila; Granddaughter, Sherrie Lopez; Great Grandchildren, Andrew and Alyssa Lopez. WE LOVE YOU AND MISS YOU DAD, GRANDPA (POLAR BEAR). Services are as follows: Rosary: 10/13/17, 7:00PM, Welch-Ryce-Haider Funeral Chapel, Santa Barbara Mass: 10/14/17, 10:00AM, Our Lady of Sorrows Church, Santa Barbara. Graveside service to follow: Calvary Cemetery, Santa Barbara followed by Celebration of Fred’s Life at Veteran’s Hall, Santa Barbara.

The family of Fernando Manuel Avila created this Life Tributes page to make it easy to share your memories.