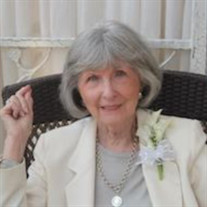 Frances J. Baron, 94, died peacefully on June 25, 2021, in Montecito, California. She was born October 17, 1926, in Eureka, California, to Frank Setleff Johnson and Mary Alice Irwin and grew up in Honeydew and Pepperwood, California. In 1945, she married Hal J. Ingram, whom she met in Eureka during World War II. Hal was stationed there while serving in the US Coast Guard. They had three children: Daniel, Mary, and John. In 1973, she married Robert G. Baron. She worked at National Institutes of Health in Bethesda, Maryland, and at Teledyne in Mountain View, California. As part of her job at NIH, she ran the NIH Chamber Music Series, which she particularly enjoyed. She lived most of her adult life in California-- first in the Bay Area, then in Montecito--but she also lived in Bethesda for several years. She loved sewing, knitting, crafts of all sorts, the San Francisco Symphony and Juilliard String Quartet, entertaining, and traveling, especially by rail. She doted on her grandchildren and great-grandchildren. For over 30 years, she volunteered with the Children's Health Council Auxiliary in Palo Alto, serving as co-president and program chair. She was also an active participant in the San Francisco Symphony League. She was a member of The Church of Jesus Christ of Latter-day Saints and served in its Young Women, Primary, and Relief Society organizations. She was predeceased by her parents; her son Daniel; her sister and brother-in-law, Maranell and Frank Kemp; and her second husband, Robert G. Baron. She is survived by her children, John Ingram (Suzy) and Mary Campbell (Philip); her nephew, Frank Kemp, Jr. (Janet); her grandchildren, Kate Lewis (Brandt), Ben Campbell (Marae), Rosalie Westenskow (Ryan), Peter Campbell (Kelsey), and Julia Hafen (Nick); and fourteen great-grandchildren, who knew and loved her as "GG". She will be buried at Mount Olivet Cemetery in Salt Lake City, Utah.

Frances J. Baron, 94, died peacefully on June 25, 2021, in Montecito, California. She was born October 17, 1926, in Eureka, California, to Frank Setleff Johnson and Mary Alice Irwin and grew up in Honeydew and Pepperwood, California. In 1945,... View Obituary & Service Information

The family of Frances J. Baron created this Life Tributes page to make it easy to share your memories.