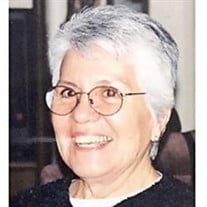 Frances Mendoza, 86, passed away peacefully on Wednesday August 26th after a lengthy battle with Parkinson’s Disease. She was surrounded by those who loved and cared for her. Frances was born in Oxnard, CA on October 4th, 1933 to Benigna Solis and Daniel Robledo. They moved to Santa Barbara while she was still a young girl, and it was there where she spent the remainder of her life. Frances learned to play piano at an early age, favoring classical Chopin and Mexican standards over current popular music. This love of music continued throughout her life. Frances graduated from Santa Barbara High School in 1952 and, during the following decade, gave birth to six children: Elizabeth, Victoria, Debra, Robert, Theresa, and Michael. In 1965 she married Albert G. Mendoza. Together, they purchased their first and only family home where Frances would spend the next 55 years. Soon after, daughter Jamie was born and her new family of seven (5 girls and 2 boys) mirrored her own (2 girls and 5 boys) growing up. A twist of fate brought the count to 8 when son Steven became a formal member of the family. This was a house filled with loudness and laughter, attracting other children from the neighborhood to our controlled chaos. Frances managed this home with a firm, but fair approach that encouraged independence. She was fond of saying “The Lord helps those who help themselves.” In retrospect, this was perhaps a self-serving approach, but one that helped to make her many children strong and confident. Limited funds brought out Frances’s resourceful side. She was a talented seamstress who made many of our clothes by hand with bolts of fabric picked up from the store by her two eldest daughters. Every meal was prepared with care and quantity in mind, including fresh homemade tortillas which filled the air and a large Tupperware container each week. During what little free time she had, Frances did volunteer work for the Goleta Union School District as a bi-lingual instructional aid and lunch lady. She also began a job at Santa Barbara Social Services as a social worker and held this position for 15 years. When Albert became ill, she became his caregiver for the next several years, and after his passing, volunteered for the Korean War Vets which honored his service to the US. At the age of 65, she was diagnosed with early stage Parkinson’s Disease. Like everything else in her life, she approached this diagnosis with a sense of humor, courage, and trademark feistiness. She also volunteered her services to the Parkinson’s Association of Santa Barbara, and in December 2009, received the Spirit of Kathryn Ish-Stahl Award for her enthusiastic and selfless dedication to the PASB and the Parkinson’s community. Her ever present smile and gentle warmth, masked a mischievous side which will be greatly missed by all who knew her. Frances is survived by her children, Steven Mendoza, Jamie Wolf, Michael Mendoza, Theresa Scholl, Robert Diaz, Victoria Pizano and Elizabeth Izzo. She also leaves behind, 18 beautiful grandchildren and 16 great-grandchildren. In lieu of flowers, please make a donation in Frances Mendoza’s name to: The Parkinson’s Association of Santa Barbara at: www.mypasb.org A grave site service will be held at Calvary Cemetery on Friday, September 4th at 10:00 AM Calvary Cemetery: 199 N. Hope Ave, Santa Barbara, CA 93110

Frances Mendoza, 86, passed away peacefully on Wednesday August 26th after a lengthy battle with Parkinson&#8217;s Disease. She was surrounded by those who loved and cared for her. Frances was born in Oxnard, CA on October 4th, 1933 to Benigna... View Obituary & Service Information

The family of Frances Mendoza created this Life Tributes page to make it easy to share your memories.