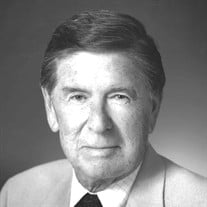 GERALD S. THEDE June 30, 1928 – August 7, 2016 Jerry Thede passed away peacefully August 7, 2016 in Santa Barbara from complications of Parkinson’s Disease after a decades’ long battle. He was a devoted family man, a truly generous and loyal friend, and a professional of the highest integrity, compassion, and skill. He just wanted to be thought of as a “good man”. Born in the small town of Dinuba, California, to Harry C. Thede and Nell Sewell Thede, Jerry was three when the family moved to the nearby metropolis of Madera where Jerry lived through high school. Jerry and his older brother Bob (who died in 2007) were the first members of the family to attend college. Both attended Stanford University and Stanford Law School. Jerry was awarded his BA “with distinction” in 1950. Having commenced law school in his senior year, he graduated from Stanford Law School in 1952 and was elected to the Order of the Coif, a national honorary scholastic society that invites the top 10% of each graduating class to membership. Also in this class were future U.S. Supreme Court Justices William Rehnquist and Sandra Day O’Connor. Upon graduation, Jerry accepted a position with the Santa Barbara law firm of Price, Postel and Parma, which traces its history back to 1852. He practiced mainly in the area of estate planning and administration, and retired as the firm’s senior partner in 1998. Jerry is survived by his wife, the former April Ravelle, whom he married in 1966 and with whom he was fortunate to celebrate their 50th wedding anniversary earlier this year. He was the father by a former marriage of two sons – Eric, who was killed while attending the University of Oregon in 1976, and Jeff, who is also an estate planning attorney, practicing in Portland, Oregon. Jeff is married to Jan, and they are the parents of Justine (a third generation estate planning attorney working with her dad in Portland) and Carsten (who works in advertising in San Francisco). Over the years, Jerry supported many nonprofit organizations by serving on the boards of Girls Club of Santa Barbara, Boys and Girls Club of Santa Barbara, Santa Barbara Association for Old Age Care, Montecito Retirement Associates (Casa Dorinda), Foundation for Santa Barbara City College, Music Academy of the West and Rotary Club. Lastly, he was an outstanding mentor for a child through the Council on Alcoholism and Drug Abuse. As a man with many interests, Jerry was an instrument-rated pilot and flew on many tours with the Aviation Country Club of California and was a member of the Santa Barbara Club, Birnam Wood Golf Club and La Cumbre Golf and Country Club. There will be a celebration of Jerry’s life from 4 to 6 pm on Sunday, September 18, 2016, at the Santa Barbara Club, 1105 Chapala Street, Santa Barbara. Contributions in Jerry’s memory may be made to Boys and Girls Club of Santa Barbara, 632 East Canon Perdido Street, Santa Barbara 93103. Arrangements entrusted to Welch-Ryce-Haider Funeral Chapels.

The family of Gerald Sewell Thede created this Life Tributes page to make it easy to share your memories.