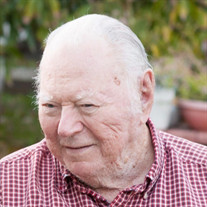 Glenn Thomas Hunter, 86, of Santa Barbara passed away on Friday, September 15, 2017. He passed away peacefully in his sleep at Valle Verde after a lingering illness. His wife of 56 years, Eleanor, was by his side. He was an honorable man who lived a life of high integrity. Glenn loved to teach the youth and taught 1000 of students in the Santa Barbara area. Glenn was born November 14, 1930, in San Diego, CA and grew up in the greater Los Angles area. Glenn entered the Army in 1952 during the Korean war, serving in Germany in the Artillery and APO. After servicing in the military, Glenn studied Mathematics at UCLA and received a master degree in education at BYU, where he met his wife Eleanor. Glenn and Eleanor were married in the Los Angles LDS Temple in 1961. Glenn taught school from Elementary to the University level during his 40 plus years of teaching. He and Eleanor moved to Santa Barbara in 1965. He taught at many of the local schools including UCSB. Glenn taught mathematics & computer at Goleta Valley Jr High and taught at night at Santa Barbara Community College for the majority of his teaching career. He was one of the first teachers to find a way to get computers in the classroom and developed courses to teach in the Santa Barbara school district. Any man can be a father, but it takes someone special to be a Dad. Glenn was a dedicated husband, father, grandfather and great grandfather. He was active in the LDS church and played the Clarinet in the local Prime Time Band. He is survived by his loving wife of 56 years, Eleanor, brother; Gordon, children; Greta & Karl, 6 grandkids; Jennifer, Stephanie, Nathan, Linus, Rylan, Canyon, and 5 great grandkids; Riann, Josie, Kenley, Noah, and Jameson. [email protected] Welch-Ryce-Haider Funeral Chapel on Wednesday, September 20th at 6 pm -7:30 pm, 450 Ward Dr. Santa Barbara, CA 93111. The funeral service will be held on Thursday, September 21st at 11:00 am at The Church of Jesus Christ of Ladder-Day Saints, 478 Cambridge Dr., Goleta, CA 93117 Memorial donations may be made to: The Church of Jesus Christ of Latter-Day Saints: Perpetual Education Fund or Temple Patron Assistance Fund

Glenn Thomas Hunter, 86, of Santa Barbara passed away on Friday, September 15, 2017. He passed away peacefully in his sleep at Valle Verde after a lingering illness. His wife of 56 years, Eleanor, was by his side. He was an honorable man who... View Obituary & Service Information

The family of Glenn T. Hunter created this Life Tributes page to make it easy to share your memories.

Glenn Thomas Hunter, 86, of Santa Barbara passed away on Friday,...