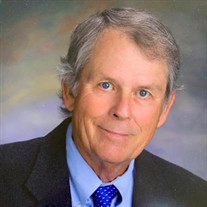 GRANVILLE TATUM HARPER January 29, 1942 - May 18, 2020 Granville Harper, beloved husband of Jill Thompson Harper, died of complications of Parkinson’s Disease in Cottage Hospital of Santa Barbara, California. He was an attorney and commercial real estate developer in San Francisco and Las Vegas, and especially enjoyed restoring historic homes in Santa Barbara. He was born in Fort Smith, Arkansas, and named after his maternal grandfather, Granville Whittington Tatum. He graduated from Fort Smith High School in 1960.That summer, he was granted a position as clerk for James W. Trimble, United States Congressman, and enjoyed learning the protocol and interesting details of Congress. He graduated from University of Arkansas, where he was a member of Sigma Nu fraternity, then attained his law degree there in 1963. He married his wife, Jill Thompson, that same year and joined his father’s law firm, Harper, Harper & Young in Fort Smith. In 1996, Granville was invited to clerk for Federal Judge John E. Miller and had the opportunity that summer to receive a unique and valuable education in Federal Law and Court Procedures. He and Jill then moved to San Francisco, where Granville joined Silver, Rosen, Fisher & Stecker, a law firm specializing in motor carrier and SEC law. Granville and Jill developed many properties in San Francisco, specializing in the restoration of historic Victorian houses and apartments in the Pacific Heights neighborhood. Granville was an accomplished golfer, a board member of First Tee, and had seven hole-in-one awards. He was a member of Montecito Country Club, La Cumbre Country Club, the Las Vegas Country Club, and the Olympic Golf and Country Club of San Francisco. Granville is survived by his wife, Jill. His younger brother, Blake Harper, died June 22, 2014.His older brother, Thomas Harper Jr., is an attorney in Fort Smith, and his sister, Katie, is a professor at University of Arkansas - Fort Smith. In lieu of flowers, the family suggests contributions to a charity of the donor’s choice. There will be a brief family gathering at Forest Park Cemetery in Fort Smith, for interment of ashes.

The family of Granville Tatum Harper created this Life Tributes page to make it easy to share your memories.