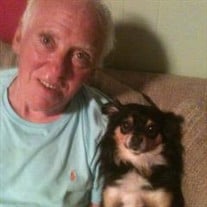 On August 18th, 2019, we lost my Daddy'O, Harry Richard "Dick” Moulder, after dealing with Parkinson’s disease for close to a decade. He was born and raised in Paoli, Pennsylvania, later followed by Berwyn, Pennsylvania. In his last couple of years, he lived with his daughter Mary, and son in law, David, in Goleta, California. He was part of the first graduating class of Conestoga High School, in Berwyn, PA. He worked for Conrail, Amtrak, in various capacities, for over 30 years. He also worked for well over 60 years, at the Paoli Hardware, where his coworkers were like family. He was an extremely hard worker, he maintained two jobs for many years, in order to support and raise his three children, as a single father. He was a very jovial, fun loving, extremely generous, family man. His children, and grandchildren, nieces and nephews were his whole world. Well, along with his various furry friends along the way, especially his "best friend ever", Baci. After we lost Baci, Daddy'O declined, missing him so much. He was the last of all of his siblings, eleven in all. He was thrilled that he got to witness the Birds win the Super Bowl. He loved all of the Philadelphia sports teams, and loved being able to watch the Phillies, even while in California. He is survived by Harry Richard "Richie" Moulder II, Justin Alan Moulder & Lisa Acker Moulder, Mary Louise Moulder & David Wolph, also his eight granddaughters, Juliana Stigliano, Emily Moulder, Lilian Moulder, Ruby Moulder, Audrey Moulder, Emily Wolph, Bethany Wolph, and Alyssa Wolph. On September 15, 2019, we will be having a Celebration of his Life, at 3:30 PM, at the clubhouse of Applebrook Meadows, in Malvern, PA

On August 18th, 2019, we lost my Daddy'O, Harry Richard "Dick&#8221; Moulder, after dealing with Parkinson&#8217;s disease for close to a decade. He was born and raised in Paoli, Pennsylvania, later followed by Berwyn, Pennsylvania. In his last... View Obituary & Service Information

The family of Harry Richard "Dick" Moulder created this Life Tributes page to make it easy to share your memories.