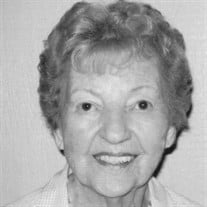 Hazel Elizabeth Hinson, passed away March 3, 2022 with her family by her side. Hazel was 96 years young and was blessed to have lived independently in her home, and with a sharp mind, until the day of her passing. Born January 30, 1926 in Los Angeles, California to Howard and Myrtle Ness. Hazel grew up in Whittier and Montebello California. After high school she worked at The Port of Authority in Long Beach. In 1944 she moved to Carpinteria with her parents where they had bought, and established, the Ness Motor Court on Carpinteria Avenue. Going back to Montebello on the train to visit her “life long” girlfriends, she met her future husband, Ray Hinson, on a blind date while he was on leave from the Navy in Long Beach. Once Ray finished his tour with the Navy, they were married in Santa Barbara on January 5, 1946 and moved to his hometown of Dothan, Alabama. Not enjoying the humid weather and huge bugs, Hazel convinced Ray to move back to Carpinteria. Hazel was a wonderful mother and homemaker spending time as room mother in each of her children’s classrooms. She was a Brownie and Girl Scout leader as well as a Cub Scout leader. She enjoyed sewing, playing golf and decorating their home, not only for each holiday, but yearly to keep up with the newest trends. Ray and Hazel had a busy life with Ray being Manager of the “new” Standard Service Station (corner of Linden & Carpinteria Ave) in Carpinteria. During this time, they built their first home in 1949 on El Carro Lane when it was nothing more than a dirt road surrounded by lemon and tomato fields. Hazel and Ray had 66 wonderful, fun filled years together until his death in 2011. In the early years they shared many family vacations traveling by car to Alabama with their children while stopping at every rest stop and tourist attraction along the entire lower part of the United States. There were many other family vacations including one particular exciting evening in Yellowstone Park as bears rubbed up against the family tent with their young kids inside. Always leading an active life, Hazel and Ray enjoyed square dancing and were members of the Carpinteria Cartwheelers. When they became empty nesters they traveled to China, Hong Kong, Mexico, Palm Springs, and the Hawaiian Islands on many golfing and sightseeing vacations. They purchased a vacation house on the golf course in Bear Valley Springs, California where many great memories were made with family and friends. Hazel enjoyed being a member of the Ladies of the Oriental Shrine. She was proud that one of their main purposes was to sew blankets, PJ’s and hats for the Shriners Hospital for Children in Los Angeles. Hazel and Ray were original founders of Community West Bank, and among the original investors in the Sandpiper and La Purisima Golf Courses. Hazel was an avid golfer belonging to the Twin Lakes Women's Golf Club where she held the position of President, and then secretary, for many years AND where she was skilled (lucky) enough to score a hole in one and also shoot one under par on the nine hole course. Hazel loved to work her crossword puzzles and was always the first one to want to play any games her kids would throw at her. She was especially dangerous when playing cards, usually Shanghai where she was almost always the first one to lay down her cards. Hazel is survived by her four children. Daughter Linda Starlin (Dean), children Judd and Jeff Barker, Deann and great grandchild Benjamin; Daughter Jo Anne Gurley (David), children Sun and Forrest Clark; Daughter Karin Westjohn (Ed), children Kalena & Tami Granada, Lauren and Lindsey. Son Mark Hinson (Leigh Anne), children Max (Katelyn) & Parker, numerous nieces, nephews and extended family member Dixie Parker. Hazel was preceded in death by her husband Ray & son Steven Ray as well as her parents Howard and Myrtle Ness and sister, Thelma Whittenberg. The family wishes to thank VNA Health and Hospice Care for the many therapists, nurses, doctors, clergy and staff who reached out with genuine care to both Hazel and her family in the last weeks of her life. A private family celebration of life will be held in Carpinteria in the near future. In lieu of flowers the family has requested donations be made to VNA Health and Hospice Care of Santa Barbara or Shriners Hospital for Children in Los Angeles.

Hazel Elizabeth Hinson, passed away March 3, 2022 with her family by her side. Hazel was 96 years young and was blessed to have lived independently in her home, and with a sharp mind, until the day of her passing. Born January 30, 1926 in... View Obituary & Service Information

The family of Hazel Elizabeth Hinson created this Life Tributes page to make it easy to share your memories.

Hazel Elizabeth Hinson, passed away March 3, 2022 with her family...