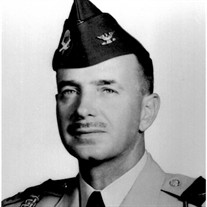 Brig. Gen. Muller was born on April 7, 1917 in Cynwyd, Pennsylvania, a western suburb of Philadelphia. He moved with his family to Santa Barbara, California in 1927. He received ab AB degree in Geology fro UCLA, and an MA in Political Science from George Washington University. Gen. Muller entered the Army as a second lieutenant from the Infantry Reserve in 1940. He was commissioned in the regular Army in 1942. In World War II, he served as G2 (Intelligence Officer) of the 11th Airborne Division in the Pacific. It was in this capacity that he planned and help execute the Raid on the Los Banos Prison Camp in which 2200 American internees were rescued and brought safely from 30 miles behind enemy lines. During the initial occupation of Japan, he served as assistant G2 of the American Forces, the U.S. Eigth Army. Upon his return to the United States, he was assigned to the Headquarters fo the Army Ground Forces and later appointed Special Assistant for current Intelligence to the Director of the Central Intelligence Agency. In this capacity he helped prepare and present the weekly intelligence briefings to President Truman. After completing the Spanish course in the Army Language School, he made use of his language training in El Salvador, the Dominican Republic and Argentina, as well as in the Panama Canal Zone as Commandant of the Army's Jungle Warfare Training Center in which instruction was conducted in both Spanish and English. During the Cuban Missile Crisis, then Colonel Muller was a regimental commander in the 82nd. Airborne Division. His regiment, the 503rd Parachute Infantry was designated in the pending plans to be first to jump into Cuba. President Kennedy visited his regiment in Fort Bragg, North Carolina, shortly before the operation was called off when the Soviet freighters carrying missiles to Cuba turned back. After attending the Army War College, he was assigned to the Army General Staff in Washington. During the war in Vietnam, Gen. Muller served as Assistant Division Commander of the 101st. Airborne Division. On his return to the United States he served as Commanding General of the Infantry Training Center at Fort Polk, Louisiana, until his retirement in July of 1971. Gen. Muller's awards include the Distinguished Service Medal, Silver Star, Legion of Merit, Bronze Star, Air Medal and the Purple Heart. After his retirement in Montecito, California, in 1971, he became active in community affairs serving for many years as a Director of the Montecito Association and Trustee of the Montecito Foundation. He was elected to the Montecito Water Board in 1977 and served as Director and President of the Montecito Water Board and the Lake Cachuma Operations and Maintenance Board for 20 years. Upon his retirement in 1997, his service to the community and to the Nation was recognized in a Joint Resolution by the California State Senate and Assembly. He married Cathryn M. Cathey of Charlotte, North Carolina in 1950. They have tow sons: Henry J. III, and environmental engineer, and Robert Allen (Deceased), and attorney. Private services were held at the Santa Barbara Cemetery where Brigadier General Henry J. Muller Jr. was laid to rest.

Brig. Gen. Muller was born on April 7, 1917 in Cynwyd, Pennsylvania, a western suburb of Philadelphia. He moved with his family to Santa Barbara, California in 1927. He received ab AB degree in Geology fro UCLA, and an MA in Political Science... View Obituary & Service Information

The family of BG Henry J. Muller Jr. created this Life Tributes page to make it easy to share your memories.