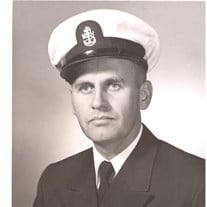 Herbert Robert Pfannenstiel Of Santa Barbara passed away peacefully surrounded by family on November 23, 2016 He was 90 years old. He was born August 17, 1926, in a farming community near Hays, Kansas to Joseph and Paulina Pfannenstiel. He was the youngest son, and ninth of ten children. His parents owned a farm there but during the depression and a period of dust storms the family moved into Hays. however they kept the farm. Herb graduated from Hays High School in 1944. With the shortage of labor during the war, he worked both part time and full time during high school with the Farmers' Cooperative Association, where he developed his knowledge of the dairy business and formed many friendships. As the Second World War continued he enlisted in the United States Navy before his eighteenth birthday, entering boot camp at the Great Lakes Naval Center. After boot camp he was transferred to Ottumwa Naval Air Station in Iowa. lt was here that he was introduced to and developed his life-long interest in Naval Aviation. He remained in Naval Aviation through the remainder of the war, and made it his career for the next 20 years, recognizing its importance for the future. His tours of duty were mainly on the East Coast, but with extensive training in Chicago and Memphis, Tennessee. While he was stationed in Washington, DC, he met his future wife, Betty Lu Price where they were married December 29. 1951. They were married just 9 months short of 50 years. when she passed away in February 2001. His navy tours were with land and Carrier Based Planes. He participated in several shakedown cruises off Cuba and Guantanamo Bay, plus one tour on the Mediterranean. As a flight crew member he was assigned on twin engine transports R4Y, P-2V and P3 anti-submarine aircraft. In 1964, at the young age of 37, he retired from military service and moved to Santa Barbara where he became an employee of the (then) General Telephone Company, now known as Verizon Phone Co., staying as an hourly employee and later as management at the Goleta Central Offlce. He retired from General Telephone ln 1984. Two sons survive him: Thomas P. Piannenstiei (Christine) of Carpinteria, and Terry B Pfannenstiel (Cheryl) of Santa Ynez and grandson, Timothy Pfannenstiel, step grandchildren: Ron Mudica, Tony Mudica, Amanda Mudica, and four step-great grandchildren. Rosary will be at Welch-Ryce-Haider Chapel, Saturday, December 3, at 2: PM. Mass of Christian Burial at St. Raphaels Church on Monday, December 5, 10:00 a.m. Graveside service with full military honors will be 10:00 AM at Calvary Cemetery, Santa Barbara. California. Arrangements by Welch-Ryce-Haider

Herbert Robert Pfannenstiel Of Santa Barbara passed away peacefully surrounded by family on November 23, 2016 He was 90 years old. He was born August 17, 1926, in a farming community near Hays, Kansas to Joseph and Paulina Pfannenstiel. He was... View Obituary & Service Information

The family of Herbert Robert Pfannenstiel created this Life Tributes page to make it easy to share your memories.