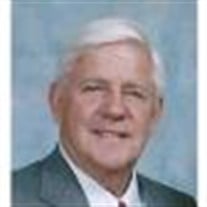 Howard was born in Hasbrouck Heights New Jersey and moved to California with his Family in the late 1940's - He is the Son of Edward J. Hawkes and Edna McIntyre Hawkes - He is preceded in death by his Son, Maximillian Dirk Hawkes and his Sister Kathleen Hawkes Taketa.He is survived by his loving wife Helga, Son's Harry Early (Charlotte), Howie (Kevin) and Grandson's Max and Henry Early. He is also survived his Sister Mary Ellmann, Brother Dr. Edward Hawkes (Ann), Brother Emmet Hawkes (Sally), Sister Edmee Pastore, Sister-in-Law Brigitte Dautzenberg and Brother-in-Law Jürgen Dautzenberg.Howard Graduated from Santa Barbara High School in 1952 and went in to the ROTC Program at San Jose State University, graduating with a BA in History in 1956. He went on to have a career in the Air Force after spending several Months in Hawaii surfing and living in paradise. He was stationed in Ramstein Air Force Base in Kaiserslautern, West Germany where he met his wife to be, Helga.Howard began a career as a Real Estate Broker in the early 1960's, by the mid 1970's Howard shifted gears, traded in his Mercedes Sedan and bought a green 1972 Datsun pick up to be more practical for his new passion of fixing and restoring homes. He was fortunate to make a second career in a job that he loved so much. He could work without all the deadlines and paperwork that he couldn't stand and was able to be creative with all the reclaimed and salvaged materials he incorporated into various projects. He was well known and liked around Santa Barbara and even more well known for his pea green Datsun truck which had a rack made out of galvanized pipe, usually with a rubber chicken dangling from the back. He loved going to his favorite coffee shops in the mid-afternoon to chat and take a break from the countless hours he spent at his jobs.Although he was very successful in his career, he is best known for his beaming personality and unparalleled sense of humor. He loved to make people laugh and was incredibly witty with his comedic timing and practical jokes.He was a loving Husband and an amazing Father who was able to provide a wonderful life for his family. Although they had made frequent trips to Germany and Europe, in later years they were very content with their routine in Santa Barbara and were blessed with a lot of family and friends. Howard will be missed more than words can say. He was joking around up until the moment he left us.Services will be at Welch-Ryce-Haider, 15 West Sola St.Wednesday May 25 at 10:00 AM - Burial to follow at Cavalry Cemetery.

Howard was born in Hasbrouck Heights New Jersey and moved to California with his Family in the late 1940's - He is the Son of Edward J. Hawkes and Edna McIntyre Hawkes - He is preceded in death by his Son, Maximillian Dirk Hawkes and his Sister... View Obituary & Service Information

The family of Howard J. Hawkes created this Life Tributes page to make it easy to share your memories.

Howard was born in Hasbrouck Heights New Jersey and moved to...