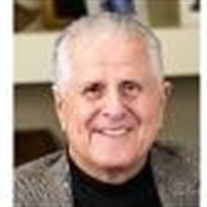 A Man For All Seasons October 4, 1923 - September 24, 2016 Santa Barbara, California Jack Nadel lived just short of 93 years, enjoying life to the fullest and bringing joy to all who had the pleasure of knowing him. Born in New York City, Jack enlisted in the military during World War II at the age of 19. When he was honorably discharged as a Captain in the U.S. Army Air Force in 1946, he had flown 27 missions in a B-29 bomber over Japan and returned home a hero. The young Nadel served as a combat navigator and radar bombardier and was awarded the Distinguished Flying Cross and the Air Medal with three Oak Leaf Clusters. He and his fellow flight crew members also received the Presidential Unit Citation, a top award for the Army Air Force. After the war, Jack began a successful career as a global entrepreneur that spanned seven decades, having founded, acquired and operated more than a dozen companies worldwide. Jack was always the first to say that he was lucky enough to have met two great women who were the loves of his life. He had two wonderful marriages: first to Elly for 54 years and then to Julie for 11 years of their 14-year partnership. Jack is survived by his two children Jeff (Shelley) and Judie, four grandchildren, Jennifer (Eric) Elizabeth (Michael), Tristan (Bianca), and Nick, and two great-grandchildren, Hunter and Sophie. In addition, Jack had two stepchildren, Shari (Ed) and Hillary (Scott) and four granddaughters (Lily, Aerin, Ella, and Hope). Jack's signature business - Jack Nadel International with 25 offices around the world - was the embodiment of his indomitable spirit, and today is thriving in its 63rd year under the leadership of his nephew, Craig Nadel. Jack won every honor in the promotional marketing and advertising industry, including being inducted into the Promotional Products Association International Hall of Fame. In 1988, he was invited by President Reagan to participate in an important Presidential Trade Mission to Japan. Jack also authored six business books and a novel including the award-winning works, "The Evolution of an Entrepreneur" and his novel, "My Enemy, My Friend". Jack was always at the cutting edge of technology, and in his 80's, he continued his writing career in the digital realm, writing for The Huffington Post, and appearing in Forbe, Entrepreneur, Vetrepreneur, and on television and radio, as well as lecturing at colleges and universities. Jack was a recipient of the first Entrepreneurial Lifetime Notable Achievement Award from Santa Barbara City College. Jack mentored many young entrepreneurs, who have gone on to very successful careers. He also hosted a popular TV show in Santa Barbara, "Out of the Box with Jack Nadel," on which he interviewed well-known celebrities and experts - all with the aim of improving the human condition. In 1990, Jack founded The Nadel Foundation whose mission continues to help improve the standard of living and quality of life, beginning with his local community. With his wife Julie at his side, Jack was a hands-on philanthropist, maintaining activities to the organizations and programs they support. Jack Nadel truly was A Man for All Seasons whose legacy will live on for generations. In lieu of flowers, the family requests gifts in Jack's memory be sent to the Nadel Prescription Navigator Program at Sansum Clinic, PO Box 1200, Santa Barbara, CA, 93102, ATTN: Dru A. Hartley.

A Man For All Seasons October 4, 1923 - September 24, 2016 Santa Barbara, California Jack Nadel lived just short of 93 years, enjoying life to the fullest and bringing joy to all who had the pleasure of knowing him. Born in New York City,... View Obituary & Service Information

The family of Jack Nadel created this Life Tributes page to make it easy to share your memories.

A Man For All Seasons