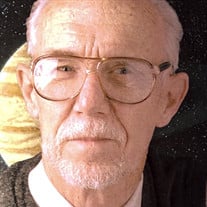 James (Jim) Beck Young - Obituary    Santa Barbara, CA – James Beck Young passed away peacefully on Saturday, October 13thth at Santa Barbara’s Cottage Hospital, with family members by his side, just shy of his 89th birthday. James was a loving husband, father, and grandfather, as well as a highly-accomplished, widely praised systems engineer, still officially consulting for NASA up until the time of his death.   Jim is survived by his wife of 60-years, Gladwyn Young; daughter Lisa Ann Russell and son-in-law Chris Russell, of Lompoc; son David Young, daughter-in-law Kristen Healey Young, and grandchildren Drake and Beck Young of Montecito.   Born in October 1929 in Knox Township Holmes County, Ohio, and raised on a working farm, Jim was the third of five children born to parents Lester and Dora Young.  He graduated from Ohio State University in 1954 with a bachelor’s degree in physics. James worked for the University’s research foundation in conjunction with Wright-Patterson Air Force Base until 1958, when he left Ohio and accepted employment out west with Santa Barbara Research Center, then housed at a former Marine barracks at the Santa Barbara Airport.    Jim would work for the same company until his retirement in 2006, under the new name, Santa Barbara Remote Sensing, a Raytheon company. Retirement didn’t last long, as Jim soon returned as a consultant, working for another twelve years for NASA and finally scaling down to just part-time in recent months as he battled with health issues.  Once in Santa Barbara, Jim met a Welsh nurse by the name of Gladywn Thomas at a Singleton’s Club, sponsored by a local church. Gladwyn was nearly ready to return to Great Britain after three years traveling and working in the US, as she had not met the refined gentleman she had hoped to find in America, when Jim came repeatedly knocking on her door…. initially as her ride to events at the club, but also apparently a convenient “set-up” arranged by a mutual friend. Jim not only had a car, but he was also gentle, well-mannered and smart, and eventually overcame his acute shyness to make his way into Gladywn’s heart. They were married in Santa Barbara in 1957, honeymooned at Niagara Falls, and eventually settled down in the hills above Goleta where they raised their family. Very few Ohio farm-boys grow up to win medals from NASA, but Jim Young is one who did. Jim was awarded NASA’s highest honor – the NASA Public Service Medal - at Goddard Space Flight Center in Greenbelt, MD in 1997, following his contributions to several major projects, including The Visible Infrared Spin-Scan Radiometer (VISSR), one of the first meteorological sensors sent in to space and the original Thematic Mapper, a program that would later become Landsat. His last major project culminated in the MODIS (Moderate Resolution Imaging Spectroradiometer) instrument, essentially a calibration lab for space. Tom Pagano, MODIS Systems Engineer Manager, credited Jim as “the brains behind the theory of radiometry” and cited his work as “a contribution to humankind’s expanded understanding of calibration and remote sensing instruments.  He contributed to just about every major flight program we’ve had at SBRS.” But Pagano adds that Jim’s skills weren’t limited to calibration. “He taught countless individuals how to do analysis. He is a legend around here.” Jim Young was a man who lived for his family and his life’s work.  “I am most fortunate to do the things I like to do,” he was known to say.  Like many genuine achievers whose actions speak louder than words, Jim’s humility, loyalty, and kindness to others made him not just an exceptional manager and co-worker, but an all-around honorable guy whose imprint will orbit our earth for generations to come.  In his semi-retirement, Jim liked to spend time with his family, playing cards and attending the soccer games and the events of his grandsons, smiling subtly, yet beaming with pride for the happy family he and Gladwyn were responsible for creating.  Being around Jim meant that you were in the presence of an honest man who shared his unconditional love with an understated wisdom, positively influencing the lives of all who were lucky enough to know him.  _ _ _ _ A memorial service for Jim Young will be held Friday, October 26th,1:30pm at the Goleta location of Welch-Ryce-Haider Funeral Chapel, 450 Ward Dr. Santa Barbara, CA 93111 with a reception to follow at Beachside Bar Café, Goleta Beach, 5905 Sandspit Rd., Goleta, CA 93117.  In lieu of flowers, donations may be sent to the Foundation of Santa Barbara Cottage Hospital https://www.cottagehealth.org/donate/make-a-financial-donation/

The family of James (Jim) Beck young created this Life Tributes page to make it easy to share your memories.