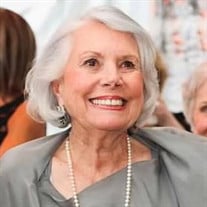 August 15, 1930 - April 2, 2022 Our beloved mother, grandmother, great-grandmother, and friend passed away peacefully surrounded by her loving family in Santa Barbara, California. Born in Glendale, California, Joan was the oldest child of Bill and Leona Winter. Raised in Arcadia, Joan attended Anoakia School for Girls and then the University of Southern California. At USC, Joan joined the Kappa Alpha Theta sorority and was voted Helen of Troy. Her elegance and beauty caught the eye of the football quarterback, Dean Schneider, who quickly became the love of her life. They were married in 1953 and celebrated 65 anniversaries. Dean and Joan raised three daughters in San Marino, California. Joan was an amazing role model for her girls, leading by example. She carried herself with unparalleled grace. Her positivity was magnetic and her kindness filled people with happiness. She was involved in National Charity League, Town and Gown, book groups, investment groups, and a docent for the Huntington Library. A talented, creative, and skilled artist, Joan painted, quilted and needlepointed. She enjoyed acting, staging, and producing Nine O’clock Players performances. Besides tennis and camping on the Colorado River, Joan loved golf and was a founder of the only women’s golf club within Los Angeles Country Club that remains today. Joan maintained many life long friendships often fulfilled by bridge and mahjong games. Fun loving with a healthy sense of humor, Joan will be deeply missed by her friends and family. She is survived by her three daughters, Kim Evans, Vicki Hough (Lachlan), Mindy El- Saden (Dhiya); thirteen grandchildren and nine great grandchildren. The family is very appreciative of the exceptional care and love provided by the staff at Casa Dorinda and Visiting Nurses and Hospice Care. A private family service will be held at a later time. In lieu of flowers, memorial contributions can be made to Casa Dorinda or Visiting Nurse and Hospice Care.

The family of Joan Elizabeth Schneider created this Life Tributes page to make it easy to share your memories.