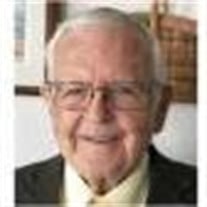 John Russell Fox, passed away May 30th, 2017. He was 86 years old. John is survived by his wife Marilyn Nigh Fox, children, Debbie (Scott) Rhodes of Clovis, CA, Linda (Craig) Harris of Edmond, OK, Robert (Kay Osgood) Fox of Arcadia, CA and John Fox of Arcadia, CA his stepchildren Greg Nigh (Nelson Sousa) of Huntington Beach, CA , Laurie Foster (Bret) of Goleta, CA, David Nigh (Sharon) of Goleta, CA, Phillip Nigh (Samantha) of Santa Barbara, CA, his seventeen grandchildren and eight great-grandchildren and his cousins Peter Freeborn and Jean Bodurtha. He was preceded in death by his first wife, Nancy Lou Fox and his parents, John S. Fox and Edith R. Smith Fox. John was born on April 20, 1931, in West Springfield, MA. He graduated from the University of Massachusetts Amherst and attended the Harvard Business School for his post-graduate education. He was a 54 year resident of the Goleta Valley. Throughout his adult life John had two professional passions, promoting and encouraging small businesses and promoting and defending the special district form of local government. For many years he taught small business courses through SBCC's adult education program and advised numerous individuals looking to start or grow their small businesses. John was elected to 11 terms on the Goleta Sanitary District Board of Directors and served several years as a Commissioner on the Santa Barbara County Local Agency Formation Commission. In addition, for many years John served on the Board of Directors of the California Special Districts Association and as its President in 2007. John was diagnosed with Esophageal Cancer in 2016 and after a valiant fight he passed away on May 30th. A service celebrating John's life for family and friends will be held at the Rancho Santa Barbara Club House at 11:00 a.m., June 24, at 333 Old Mill Road, Santa Barbara, CA. John's family has asked that in lieu of flowers, donations in John's memory be made to the Cancer Center of Santa Barbara or the Food Bank of Santa Barbara County.

The family of John Russell Fox created this Life Tributes page to make it easy to share your memories.