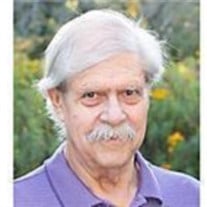 John Hudson McKnight, age 77, of Santa Barbara, passed away peacefully Tuesday, March 10, 2020, as a result of ongoing health complications. A life-long resident of Santa Barbara, John was born on January 7, 1943. He was the only child of Harold and Ethel McKnight, both of whom preceded him in death. John attended Franklin elementary, Santa Barbara Junior High and Santa Barbara High School. After high school, he proudly served as an electrician assistant in the United States Navy. Upon completion of his military service, John continued his education at Santa Barbara City College, where he met and later married the love of his life, Susan (Sue) Green, to whom he was married for fifty years, and who preceded him in death two years ago. John was highly intelligent and had many skills and abilities. As a young man, he spent time as a Boxer in Hawaii, where he ranked 9th best in his weight class. John also served as a Santa Barbara County Firefighter. His greatest gift, however, was as a talented artist. He designed and created the stained glass art and famous "Coca Cola" lamps for Machet of Santa Barbara. John's talent was recognized by Disney, as he was commissioned by them to do several special projects. In his later career, John held management positions with local newspapers, including the Santa Barbara News Press, until his retirement on January 06, 2006 Having no children of their own, Sue and John's closest family were Sue's younger twin sisters, who loved and looked up to John since they were 5 years old. John leaves behind "his twin sisters," Lori Lee Green-Stade, her husband Kevin, their children Kadie and Nicholas Stade and Patti Sue Green, her son Shawn Incollingo, and Patti's grandson Ryder Hudson Incollingo-Cooklin (named after his great Uncle John), closest cousin Noreen Brent, along with many life-long friends. A celebration of life will take place in the near future once it is deemed safe and the International health crisis has passed. An update will be published at that time. John was passionate about many things; closest to his heart were animals, especially his kitties, which gave him great joy, history, nature and music. In lieu of flowers, John would much prefer for those who are able, that a donation be made to: "ResQue Cats" of Santa Barbara", or your local animal shelter. John was a kind, gentle and generous soul, who touched and influence many. He will be deeply missed by all who knew and loved him.

John Hudson McKnight, age 77, of Santa Barbara, passed away peacefully Tuesday, March 10, 2020, as a result of ongoing health complications. A life-long resident of Santa Barbara, John was born on January 7, 1943. He was the only child of Harold... View Obituary & Service Information

The family of John Harris McKnight created this Life Tributes page to make it easy to share your memories.