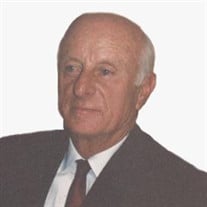 John Henry Riffero 07/08/1915-12/28/2021 It is with heavy hearts that the patriarch for the Riffero family passed away at age 106 1/2 on his son’s 80th birthday. He died peacefully at home surrounded by family. John was a strong man who planned to live forever. He loved life and wanted to stay in charge to the last breath. He was a humble, faithful, proud, and stoic man able to handle whatever came this way. John was born in Renton Washington to Mauricio and Zefferina (Favro) Riffero on July 8, 1915. He and his older brother went to Bussoleno De Susa, Italy (near Torino) with their mother at age two until age nine when they returned to Santa Barbara in 1925 surviving the Big Earthquake. He attended Franklin Elementary, SBJH and graduated from SBHS in 1934-the first of 4 generations of Dons. John started out at the age of 15 as a gardener on a Montecito estate, then at age 18 he became a singing waiter at the Cafe Paris in Los Angeles. He returned to SB to take care of his Ill mother and help his father with his younger brother, Steve. In 1936 John was the youngest man to pass the California Real Estate brokers license exam at the age of 21 opening his first office at the Granada building. He invested in real estate and took pride in maintaining his properties himself until the age of 100. His life was interrupted by the 2nd World war when he was sent to Nagasaki Japan in the aftermath of the 2nd atomic bomb. Returning to SB, he continued his career in real estate and expanded into insurance sales as well as, working as a notary public. He volunteered and ushered at Our Lady of Sorrows Church until the age of 99. He also volunteered for many years at the Boys Club of santa Barbara by helping with the annual fairs and Thanksgiving dinners. John lost his wife of 80 years, Emma M. Riffero, on February 17th, 2021 ten days before her 100 birthday and he held her hand to the end. He is also preceded in death by this two brothers: Richard J Riffero and Steve A Riffero. also Sister in Laws Norma Peters(Marc), Louise Golin (John) and brother in law, Guido Brun (Cora). He leaves behind hi son, John H Riffero ll (Pamela) and his daughter, Norma Jean Leifer (Vincent). He is also survived by his 8 grandchildren: John H Riffero lll (Yun Hue), Rochelle Baiocchi (Joel), Erin Leifer (Brian Johnson), Ashley Leifer (Pauline Irawan), Leslie Kneafsey, Emma Leifer (Paul Henry), Autumn Lotus, and Erica Phillips and his 12 great-grandchildren: Justin Baiocchi, Christian Johnson, Aiden Kneafsey, Elena Johnson, Evryn Kneafsey, Madeline Kneafsey, Bryn and Tobin Irawan-Leifer, Arianna Riffero, Jasmine Gularte, Dakota Lotus and Lily Phillips. He also leaves behind his nephews Richard J. Riffero, Jr., Fred Golin, Michael Durbiano lll (Kathy) and Michael Brun, and nieces Deanne Peter-Pace (John, Marie Modler, and Gina Marie Brun Allred. The Family would like to thank the Meals on Wheels, VNA-Health, Eva and The International Caregivers Corp for all their help. We Especially Thank Vicky Jallores, his devoted caregiver. A Funeral mass is to be Monday January 24th at Out Lady of Sorrows Church, under Covid restrictions. Burial at Catholic Calvary Cemetery to follow. In Lieu of flowers, you may donate to SB meals on wheels, Our Lady of Sorrows parish of SB, VNAHealth on 512 E Gutierrez St or the United Boys and Girls club of SB, Calif.

The family of John H. Riffero created this Life Tributes page to make it easy to share your memories.