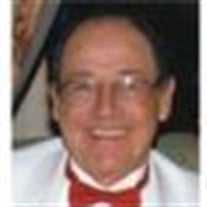 3/18/1932 to 12/6/2015The world lost one of it brightest stars with the passing of Joseph Jerry Geneau on December 6, 2015.Jerry was born on March 18, 1932 to Odile and Stanley Geneau in Bath, Maine and was the youngest of seven. His childhood was spent helping his dad on the farm where he enjoyed ice skating and other cold weather activities. At 17 he left Morse High School and enlisted in the USAF where he served for four years. He was a radio mechanic and a special entertainment escort for the USO. When the call came for skiers to help train the new Japanese Olympic Ski Team he was picked and trained and participated in all four events. Jerry met Jean Adams and they were married in Japan where they soon had their first son Doug. They left Japan and they moved to Texas where their second son Rick was born. Jerry attended the Boston School of Optics and they moved to Los Angeles and eventually moved to Santa Barbara. Always interested in the theater he became involved and performed in various productions in the Alhecama Theater, Lobero Theater and the Timbers. Jerry was the president of the Santa Barbara Ski Club, Optimist Club, Toastmasters and was Master of Ceremony for the Exchange Club. He was the executive president of Old Spanish Days Fiesta and served on the board for 13 years. He was involved with all the events and rode in the parade many times. Jerry opened Geneau Optical in 1966 and was an optician for thirty years. In 1969 he met Brenda Richardson Begg, a widow with three small children, and they were married in 1971 and that began a new chapter in his life. They purchased a sailboat and joined the Santa Barbara Yacht Club where they spent many happy hours enjoying the nautical life. Together they hosted many parties in their home and had BBQ's for which Jerry became famous. Good times were enjoyed by all who were lucky enough to taste his oak flavored meat. Jerry was known as the best "joke teller" ever and Brenda sometimes played the straight man and hours were spent laughing and partying wherever they went. In 1981 Jerry was asked by a fellow yacht club member to join him and two other young men to bring his 43' Cuttyhunk sailboat from Cornwall, England to Florida. Jerry took a 3 month "hiatus" and fulfilled every sailors' dream by crossing the Atlantic Ocean from England to Florida. After selling his last sailboat Jerry took up the game of golf and many happy hours were spent playing with friends and family. Jerry and Brenda were involved with RVing and camping and fishing was his lifelong companion whether at Lake Cachuma, where they had a boat, or ocean fishing or the Sierras he was truly his happiest in the great outdoors. In 2005 Jerry and Brenda went on a trip to Africa with friends and that began a ten year period of world travel. Jerry said in the last few years I have seen and done everything I ever wanted to in my life and more. Jerry truly loved people and his humor touched anyone he met and always brought a smile to their face. He was a man who will be missed by all. He is survived by his wife of 44 years Brenda, sons Douglas Geneau (Nadine) and Rick Geneau (Debbie) Step-children Donald Begg (Teri), Jimmy Begg, Amber Fruchey (Jonathan) Grand-children Dawn Elliott (Joe), James Begg, Tanner Begg, Emily Begg, great-grandchildren, Alyssa, Aubree, and Gunnar and three sisters Lucille, Mae and Gladys. There will be a "Celebration of his Life" on Saturday January 30, 2016 at the Santa Barbara Elks Club, 150 North Kellogg, Santa Barbara, Calif. At 1:00 PM. In lieu of flowers donations may be made to the Santa Barbara Youth Sailing Foundation, 130 Harbor Way, Santa Barbara, Calif 93109.

The family of Joseph Jerry Geneau created this Life Tributes page to make it easy to share your memories.