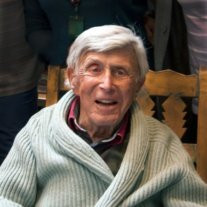 Joseph H. Pollock, M.D. was an exceptional man. A noted surgeon, author and philosopher, he passed away on June 22 at Cottage Hospital in Santa Barbara. He was known throughout Beverly Hills, Montecito, Santa Barbara and Summerland for his perseverance, kindness, philanthropy, humor and endless positivity. Dr. Pollock was born in St. Louis, Missouri on November 17, 1913 to Sam and Rose Pollock, and was one of six siblings. He graduated from Washington University in St. Louis with a Bachelor of Science degree. After earning his M.D. degree in 1938 from Washington University, he specialized in abdominal surgery in Beverly Hills, California, serving as chief of surgery at several hospitals, including Cedars of Lebanon. He practiced medicine for almost 50 years. During this time he also took over his late father-in-law's company, Triangle Steel and Supply, and ran it for three years until its sale, opening branches of the business in San Diego, Ventura, Las Vegas and Phoenix. He and his wife Helene were Founders of the Music Center of Los Angeles and were active in the Los Angeles County Museum of Art and the Mark Taper Forum. After moving to Montecito 26 years ago, he became chairman of the Santa Barbara Film Festival for five years in the 1990s. Through the Joseph and Helene Pollock Foundation, he spearheaded the creation and construction of the Pollock Theater at UCSB, which opened in 2010. He also became active in real estate in Santa Barbara, Montecito and Summerland. Dr. Pollock was an avid golf and tennis player, playing golf up until his late nineties. Additionally, he was interested in philosophy and ancient civilizations, and was the published author of six books, including two philosophical explorations and two medical texts. After retiring from medicine, he continued to attend surgical meetings until the last weeks of his life. He also had a life-long dedication to technology and kept in close contact with his grandchildren and family via e-mail and Facebook. Dr. Pollock touched many lives during his almost 100 years. He was creative in business practices and medical diagnoses and was always there for his friends and family. Throughout his life he honored the memory of his parents. He will be dearly missed and forever loved by his wife of 67 years Helene (Zalk); his three children, Tom Pollock, Ken Pollock, Margo Sinclair (Pollock); his four grandchildren, Ali Gagerman (Pollock), Allegra Brandano (Pollock), Luke Pollock and Ariel Stern (Sinclair) and his five great-grandchildren, Haley, Benjamin, Amelia, Owen and Madeline. In lieu of flowers, donations in his memory can be made to the UC Santa Barbara Foundation, Pollock Theatre in memory of Joe Pollock. Please mail to: Nicole Klanfer, Office of Development, UC Santa Barbara, Santa Barbara, CA 93106.

Joseph H. Pollock, M.D. was an exceptional man. A noted surgeon, author and philosopher, he passed away on June 22 at Cottage Hospital in Santa Barbara. He was known throughout Beverly Hills, Montecito, Santa Barbara and Summerland for his... View Obituary & Service Information

The family of Dr. Joseph H. Pollock created this Life Tributes page to make it easy to share your memories.