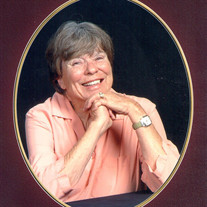 Judy was 85 when she passed very peacefully on Friday, March 7th surrounded by her family. She grew up in St. Clair, Minnesota, a small town of about 400 people. Her folks, Marvin and Edna Rohrer ran the drug store and the post office so they knew everyone and everything that went on. Her folks eventually moved Judy, her sister Dorothy, and her brother Marvin, to Prescott, Arizona, a bit larger but still a small town where they owned the drug store again and her dad chaired the Board of Supervisors so they knew everyone again. Judy went on to graduate from The University of Arizona in Tucson and then on to the Colorado School of Nursing in Denver. She then went to United Airlines Stewardess School and combined pediatric nursing at Children's Hospital in San Francisco with flying the SF to Honolulu route. This would put her on the beach for 3 days soaking up the rays before working the return flight to SF poor girl. San Francisco in the late '50s was big but you still seemed to know everyone. While Judy shared the penthouse of an apartment building on the Avenues with some other stewardesses, lurking on the ground floor was her husband-to-be, Dick Thielscher. Dick pursed her for 2 years until she finally relented and agreed to marry him in 1959. Two years later, they moved to Fairfax when their first child, Robert arrived. Three years later Doug was born at the same hospital where she worked so they spoiled her plenty. They later moved down the Peninsula and finally moved to Montecito in 1964 and Tracy was born at Cottage Hospital. Dick says they had the perfect marriage but Judy's sister, Dorothy says "Don't you believe it but it was pretty darn good". Judy was a stubborn Swede with a heart of gold and a devoted mother to her kids. She opened her home to so many people, including unwed mothers who had nowhere else to go. She was later blessed with 7 grandchildren, Stephen, Sam and Nate Thielscher (Rob and Mary's); Maddie, Zack and Shea Batchelder (Tracy and Kim's kids) and "wee Finn" (Doug and Sue's 3 yr. old). Judy loved people and people loved Judy. She was very involved in all the kids' schools at Montecito Union, Santa Barbara Junior High and High School. She was very active: a docent at Lotusland, served on the Board at The Phoenix House, President of the Friends of the Montecito Library Board, an active member of The Junior League, The Garden Club of Santa Barbara, The Montecito Association's Beautification Committee, The Little Town Club, member of The Grand Jury, worked full time as a travel agent and still found time to throw great parties and make the best soup in town. She loved the family camping trips and vacations with her sister Dorothy's (Bob Schnackenberg) eight children and set up the house for Thanksgiving dinner for 38 plus one setting for Jesus just in case he showed up. The family wants to thank all the incredible caregivers at Mission Villa Dementia Home and its owner, Dana Newquest, who for years took Judy wherever he went and made her feel extra special. Services will be held at All Saints Church in Montecito, Saturday, March 30th at 2:00.

Judy was 85 when she passed very peacefully on Friday, March 7th surrounded by her family. She grew up in St. Clair, Minnesota, a small town of about 400 people. Her folks, Marvin and Edna Rohrer ran the drug store and the post office so they... View Obituary & Service Information

The family of Judy Thielscher created this Life Tributes page to make it easy to share your memories.

Judy was 85 when she passed very peacefully on Friday, March...