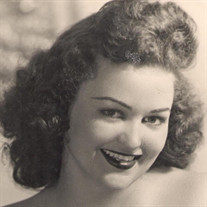 Julia M. Givens Leaken-Frederick Passed away on August 4, 2018 at Casa Dorinda in Montecito of congestive heart failure. Born in Hanson, Kentucky in 1921, the family relocated to Alhambra, California, in 1922. Julia was a swimsuit model at Mrs. Snively's modeling agency at the Ambassador Hotel alongside her friend, Norma Jean Dougherty, later known as Marilyn Monroe. After living in Japan and Europe throughout the 1950s with her husband, Army Major Richard M. Leaken, she moved on the Monterey Peninsula in 1959 and became a very successful real estate agent for Tri-City Real Estate and continued her passion for painting. The family relocated to Santa Barbara in 1966 where Julie continued her successful real estate career and studied under the celebrated painter, Andre Andreoli. Her paintings were displayed and sold at several Ray Ramsey Galleries in Carmel over the years. She is survived by her only child, Linda Leaken Nakamura and son-in-law, Jolson Nakamura along with two nieces. Julia was married to Richard M. Leaken from 1948 until his death in 1984. Julia enjoyed a very happy second marriage with Mr. Walter Frederick, marrying him in Carmel in 1998. Mr. Frederick passed away in 2002. Julia came from the Givens Family, who were descendants of an old Kentucky family and on his mother's side by Colonel Clarence Valentine Walker and Mary Elise Walker of Atlanta, GA. Her siblings included Ann, Mary, Harry, Bob, Joyce, and Jerry all of whom had a happy life thanks to their mother, Ruth. Arrangements entrusted to Welch-Ryce-Haider, 15 East Sola Street, Santa Barbara, CA, 805-965-5145.

Julia M. Givens Leaken-Frederick Passed away on August 4, 2018 at Casa Dorinda in Montecito of congestive heart failure. Born in Hanson, Kentucky in 1921, the family relocated to Alhambra, California, in 1922. Julia was a swimsuit model at... View Obituary & Service Information

The family of Julia M. Givens Leaken-Frederick created this Life Tributes page to make it easy to share your memories.