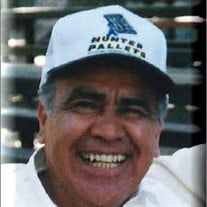 Julian Navarro Reynoso, a chef and life-long resident of Santa Barbara, CA., died unexpectedly on March 16, 2017 at the age of 77. Julian is survived by his children; Ramon Reynoso, Ruben Reynoso (Jaime), Benjamin Reynoso (Griselda), Patricia Reynoso and Omar Reynoso, 11 grandchildren and 2 great-grandchildren. He was preceded in death by his son, Jose Reynoso. He was born in Jalostotitlán, Jalisco, Mexico on January 9, 1940 to Delores Navarro and Trinidad Reynoso. He worked in the food industry for over 50 years in several locations around the Santa Barbara area. A devout Catholic and devoted father, he rarely missed a Sunday mass while often working two jobs to assure his family was provided for. He enjoyed watching a variety of sports games and was a big fan of the LA Dodgers and Dallas Cowboys. You could regularly find him walking from place to place, enjoying the weather in the city he loved. He will be deeply missed by his family, friends and all who knew him. Rosary services will be held Friday, April 7, 2017 @ 7 p.m. at Welch- Ryce-Haider Downtown Mortuary, 15 E. Sola St., Santa Barbara, CA 93101. Funeral Mass Services will be held on Saturday, April 8, 2017 @ 10 a.m. at Our Lady of Sorrows Catholic Church, 21 E. Sola St., Santa Barbara, CA 93101. Flowers may be offered and sent to the mortuary.

The family of Julian Navarro Reynoso created this Life Tributes page to make it easy to share your memories.

Julian Navarro Reynoso, a chef and life-long resident of Santa...