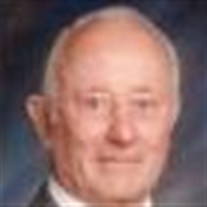 Anthony Guntermann died February 11, 2017 at the age of 97. He was born in San Diego to Lottie and William Guntermann on July 19, 1919, and lived in Calexico, CA. At the age of four he spent a year in Germany with his grandparents, aunts and family. The family settled in Santa Barbara just after the earthquake in1926. He attended Santa Barbara Teachers College Elementary School, La Cumbre Junior High, and Laguna Blanca School in Laguna's first graduating class. He later earned a degree at Stanford University in 1942. During the war, he did defense work at Douglas Air and Westinghouse. After the war, he was general manager of Andersen's Pea Soup Restaurant and Inn in Buellton and participated in meetings to motivate the county to build an airport in the Santa Ynez Valley. Returning to Santa Barbara in 1949, Tony earned his CPA certificate and developed his accounting practice and enjoyed partnering with other CPA's. After his retirement in 1986, his firm merged with the McGowan office and is today known as McGowan Guntermann, CPA's. Tony was active in the local and California CPA Society and served on the California State Board of Accountancy for 8 years, and on a national group organizing to establish uniform accounting standards and examinations in all of the states. Tony strongly believed in civic duty and responsibility and in giving back to his community. He built a reputation for integrity and decency in all of his relationships as well as kindness and compassion for those in need. In the mid-50's he served on the SB City Council under Mayor Jack Rickard, working to purchase and develop Shoreline Park and the SB Airport. He later served as Chair of the Harbor Commission. He was one of the founding directors of Santa Barbara Bank and Trust (now Union Bank) in 1960-1999, and also a director of Mission Federal Savings and Loan, later Home Federal SandL of San Diego. He served actively on and with boards of the Junior Chamber of Commerce, Santa Barbara Zoo, Cottage Hospital, S.B. Foundation, Committee on Alcohol, Hope Ranch Homes Association, Girl Scouts, La Cumbre Country Club, University Club, Santa Barbara Rotary Club, and was a member of the Santa Barbara Club for over 50 years. His life was filled with activities such as tennis, golf, sailing, skiing, and hiking. He participated in sailboat racing around the Channel Islands and to Acapulco and Hawaii as a crew member. Tony enjoyed forty-six years piloting single-engine aircraft, making many trips with family and friends. Tony was married to Marian McKenna, the mother of his children, and later to Elizabeth Wilson, both of whom predeceased him. For 12 years he enjoyed the companionship of Jean (Judie) Stanley, until her death in 2013. Tony is survived by his children Penelope, Christopher and Holly and their spouses Michael, Christine and Paul; his grandchildren Arielle, Corinne, James and Tony; as well as stepdaughter Janet Wilson, her spouse Fred Hartzell and daughter Amy of Pebble Beach. His five siblings - William, Paul, Joseph, Cecelia and George - also predeceased him. A memorial reception will be held at LaCumbre Country Club on Sunday, April 9 from 2-4 pm. If desired, in lieu of flowers, support of Visiting Nurses and Hospice, the Yosemite Conservancy, or your favorite charity is appreciated.

Anthony Guntermann died February 11, 2017 at the age of 97. He was born in San Diego to Lottie and William Guntermann on July 19, 1919, and lived in Calexico, CA. At the age of four he spent a year in Germany with his grandparents, aunts and... View Obituary & Service Information

The family of Anthony Guntermann created this Life Tributes page to make it easy to share your memories.