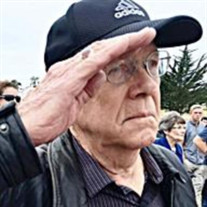 In 1952, Sgt. Kenneth C. Working Jr. was fighting with the U.S. Army’s 3rd Division in Korea when he was moved by the sight of orphans in rags everywhere. Later a longtime Santa Barbara church executive, Working would recall writing to his mother in Long Beach, asking her church to send clothing for the kids. He rounded up fellow soldiers to join in the drive, and Working was amazed to receive more than 100 parcels containing 500 pounds of clothing. He later laughed about the flood of donations. “I thought I’d get in trouble with the army,” he said. Instead, the army featured the drive in Pacific Stars & Stripes. The act was emblematic of Working, who died Monday, Jan. 10, 2022, at 90 years old after a life of service. He and his wife, the Rev. Marjorie (Miji) Working, would go on to adopt two disabled orphans from South Korea and Vietnam in addition to their three biological sons. Working died at home after a two-year battle with amyotrophic lateral sclerosis (ALS). He was executive presbyter in Santa Barbara for 15 years, overseeing 36 area Presbyterian Church (U.S.A.) congregations in a region stretching from Cambria to Simi Valley. Under his watch, the presbytery founded multiple new churches, including Hispanic outreach ministries. A service will be held at 11 a.m. Jan. 22, 2022, at El Montecito Presbyterian Church, 1455 East Valley Road in Santa Barbara. In lieu of flowers, donations may be made to the Reformed journal Theology Matters, TheologyMatters.com. A hardscrabble childhood Born Jan. 6, 1932, Working grew up on a hardscrabble farm in then-rural South Los Angeles. His father, Kenneth Working, Sr. was a farmer, tinkerer and inventor who held multiple patents. His mother, Ruth Working, was a housewife. The family struggled in poverty during the Depression. Kenneth, Jr. would later recall his parents taking home a chicken their car accidentally hit on the road; they cooked it for dinner. For a while he lived with his aunt and uncle because his parents couldn’t afford to feed their five children. In January 1951, with war raging in Korea, Working enlisted in the U.S. Army. The need for soldiers was so great, he completed his basic training on shipboard while crossing the Pacific. He saw combat, earning a Bronze Star and Purple Heart. Severely wounded when his Jeep hit a land mine and flipped over on him, he recuperated for several months in Japan. Working then volunteered to return to combat. After the war, Working attended University of Southern California but graduated from Long Beach State. He met his future wife, Marjorie A. Skare of Long Beach, during a political science class trip to Sacramento. She had lost her brother, a U.S. Air Force navigator, during a bombing raid over North Korea the same week Kenneth arrived in the war zone. They married May 26, 1958. Working spent time as an engineer with Douglas Aircraft, a Long Beach aerospace company later absorbed by Boeing. He also worked for Varec, which supplied equipment to oil companies. Adopted two orphans They had three biological sons, who survive: Randal, now of Acton, Calif.; Russell, of Oak Park, Ill.; and Jeffrey, of Santa Barbara. In 1965 the family adopted Jay, of Citrus Heights, Calif. In 1975 they adopted a Vietnamese son, Tom, of Santa Barbara. Working also heard a call to the ministry in 1967, when he became convinced of the reality of the Resurrection of Christ described in John 20. He would earn his Master of Divinity degree at Fuller Theological Seminary, and later received a Doctor of Ministry from San Francisco Theological Seminary. Working shepherded several major West Coast congregations. From 1971-1977 he was executive associate pastor at Bel Air Presbyterian Church, which Gov. Ronald Reagan attended. He later was senior pastor of Longview (Wash.) Community Church and Carmichael (Calif.) Community Church before assuming the reins of the presbytery in Santa Barbara. Over the years his churches have started community job training programs, sponsored Southeast Asian refugees and initiated counseling programs. They sent mission teams as far afield as Mexico, Uganda, Peru and Guatemala. In addition to his wife and five sons, Working is survived by his brother Curt, of Checotah, Okla., and his sister Cora Lambach of Tucson, Ariz.; granddaughters Lauren, Magalie, and Celia Working; grandsons Sergei, Joshua, and Lev Working; and great-grandson Matvei Working. The family is grateful to faithful caregivers Fidel Castillo and Claudia Felez. In 1985 Working described his pilgrimage. “It’s been a spiritual journey,” he said, “seeking faithfulness to God along the way.”

In 1952, Sgt. Kenneth C. Working Jr. was fighting with the U.S. Army&#8217;s 3rd Division in Korea when he was moved by the sight of orphans in rags everywhere. Later a longtime Santa Barbara church executive, Working would recall writing to... View Obituary & Service Information

The family of Kenneth C. Working Jr. created this Life Tributes page to make it easy to share your memories.