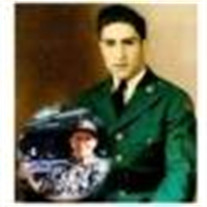 88, passed away peacefully after a short stay at Cottage Hospital in Santa Barbara, CA on April 21, 2015 with his son, David at his side. He was born in Buena Vista, CO on June 10, 1926 to Solomon and Andrea (Avila) Montano. Laurence graduated from Leadville high school and attended the University of Missouri. He joined the U. S. Army during World War II and attained the rank of Sargent. He was awarded two Bronze Stars and was honorably discharged in 1946. Laurence married Caroline (Ortiz) Montano in Leadville and worked for the United States Postal Service. He served as Postmaster in Leadville from 1961 until his retirement in 1972. He enjoyed hunting, fishing, and was a member of Annunciation Parish where he attained 4th Degree in the Knights of Columbus. The family moved to Goleta, CA in 1972 where Laurence worked in the Building Services Department at the University of California at Santa Barbara for 16 years. He retired a second time and utilized his expertise working with his son David for eight years at "Dave's Market" in Isla Vista, CA. He enjoyed music, bible study, and advocating for veterans after his third "retirement." Laurence lived at Wood Glen Assisted Living facility in Santa Barbara, CA for several months, where he met Mildred Thomas, whose company he enjoyed until she passed away in 2010. Laurence enjoyed his last several years at home, thanks to around-the-clock care from his son, David. There were many good meals, short trips in the area, and visits with family, friends, and neighbors. He loved to share memories of his life embellished with humor and some hard to believe "facts." Laurence took delight in providing "forbidden" treats to his granddaughters when they were young, such as trips to 7-11 for snacks and placing coins in the backyard ?money tree.? His older grandsons received Cracker Jacks as Christmas presents and he enjoyed sharing his coin collection. Laurence is survived by his sister Dolores Roberts, Omaha, NE; brother Albert Montano, Grand Junction, CO; former spouse Caroline Montano, Happy Valley, OR; son Larry Montano (Cathie), Humble, TX, daughter Virginia Teter, Happy Valley, OR, son David Montano, Goleta, CA, son Stephen Montano (Saradrey), San Luis Obispo, CA; grandchildren Renee Orr (James), Happy Valley, OR, Marilyn Montano, Austin, TX, Crystall Montano (Delana), Portland, OR, Brandon Montano, Santa Barbara, CA, Cody Montano, Las Vegas, NV, Leo Montano, Humble, TX; great-grand children Elias and Ily Montano, Portland, OR, Avery Orr and Teagan Orr, Happy Valley, OR; and many other relatives. Laurence was preceded in death by his sister Virginia Montano (1933), father Solomon Montano (1949), mother Andrea Montano (1974), and sister Ruth Quintana (2015). Viewing will be Thursday, May 7, 2015 from 4:00 to 8:00 p.m. at Welch-Ryce-Haider Funeral Chapel, 15 East Sola Street, Santa Barbara, CA. Graveside services, with military honors, will be Friday, May 8, 2015 at 1:00 p.m. at Goleta Cemetery, 44 South San Antonio Road, Santa Barbara, CA. A Reception will follow. The family requests donations be made to the American Diabetes Association in lieu of flowers.

88, passed away peacefully after a short stay at Cottage Hospital in Santa Barbara, CA on April 21, 2015 with his son, David at his side. He was born in Buena Vista, CO on June 10, 1926 to Solomon and Andrea (Avila) Montano. Laurence graduated... View Obituary & Service Information

The family of Laurence Montano created this Life Tributes page to make it easy to share your memories.

88, passed away peacefully after a short stay at Cottage Hospital...