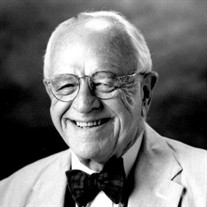 Lawrence Burton Williams, M.D. (Larry) was born in a farmhouse near Olin, Iowa on December 19, 1923; son of Roy Herman Williams and Emma Edith Fry Williams. He passed away on November 3, 2015 at the age of 91. Following his primary education, he attended Yale University and the University of Iowa from which he received his M.D. degree in 1948. During his academic career he received many honors including Phi Beta Kappa and Alpha Omega Alpha, an honorary Medical Society. He graduated first in his class. He was awarded a varsity letter in baseball while at Iowa, in the Big Ten Conference. After receiving his Medical Degree he pursued further training at Cleveland City Hospital and then entered a Surgical Fellowship at the Mayo Clinic in Rochester, Minnesota. He served with honor in the U.S. Army during World War II and the Korean War. Following his discharge in 1953 he established a successful family practice in Maquoketa, Iowa for 10 years and then moved to Santa Barbara in 1963 where he established a successful solo General Practice on State Street for forty years until his retirement in 2003. He served on the active staff of Goleta Valley Hospital, St. Francis Hospital and Cottage Hospital. Dr. Williams was one of the founders of the Goleta Valley Hospital. He served for a term as Chairman of the Family Practice Department for all the hospitals. He also served, in addition to his office practice, as emergency room physician for Cottage and St. Francis Hospitals over a 20 year period from 1963 to 1983. In the nineteen sixties, Dr. Williams enjoyed sailing with family and friends on his 50 foot Schooner, the La Volpe. He raced La Volpe many times including 4 annual May Day races from Newport Beach to Ensenada, Mexico. In 1966, at the invitation of the San Francisco Yacht Club, he participated in the Tall Ship Regatta in the San Francisco bay. He was a member of the yacht club and the Santa Barbara Tennis Club. Larry also had a very pleasant and successful avocation as an actor. Over the years he had many leading roles at the Lobero Theater, Garvin Theater of City College and at the UCSB campus, Santa Barbara. He was awarded an "Indie" Trophy for his role in "Buried Child". He was a member of the Screen Actors Guild. He played baseball at the first annual Dodger Baseball Fantasy Camp at Vero Beach at the age of 60. He is survived by 4 children: Dr. Lawrence R. Williams and wife Mary of Baltimore, Dr. Edward R. Williams and wife Laurine of Little Rock, Mrs. Lucy Ann Zeimet and husband Curt of Bellevue, Iowa and Ms. Elizabeth Ann (Bett) Williams of Santa Fe and Los Angeles; 6 grandchildren and,7 great grandchildren. Donations may be made to the Cottage Hospital Fund, Santa Barbara, CA 93105. At his request there will be no formal services. There will be a private family burial at a later date at the family plot near Olin, Iowa. It is on a beautiful hillside; his birth place is visible in the distance.

Lawrence Burton Williams, M.D. (Larry) was born in a farmhouse near Olin, Iowa on December 19, 1923; son of Roy Herman Williams and Emma Edith Fry Williams. He passed away on November 3, 2015 at the age of 91. Following his primary education,... View Obituary & Service Information

The family of Lawrence Burton Williams M.D created this Life Tributes page to make it easy to share your memories.

Lawrence Burton Williams, M.D. (Larry) was born in a farmhouse...