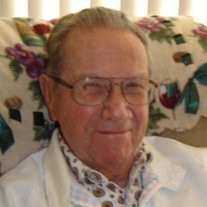 Lester Raymond Koehler, 94, of Carpinteria, passed away in his home on February 1. Lester is survived by his two daughters Carol McClellan of Newbury Park, California and Marjorie Binns of Hutto, Texas; a sister, Katherine Coates, of Paradise, California; and four granddaughters. He was preceded in death by his beloved wife Naomi Koehler. Lester was born in Davenport, Iowa on January 7, 1919. After the death of his father in 1935, Lester, his mother and four siblings made the trip out west to join his sister in Carpinteria where he resided for the following 78 years. As a young man, he worked at the Carpinteria Lemon Association packing house that was once located on the corner of Palm Avenue and 6th Street. Lester worked on the lemon packing line until the onset of World War II, when he was drafted into the US Army. He was deployed to the Pacific Theatre and participated in the major military engagements at Leyte Gulf and Okinawa. He operated amphibious tractors used to transport troops to the beaches. Lester served his country honorably and was intensely patriotic for the rest of his life. Upon his honorable discharge at the end of the war, Lester returned to Carpinteria and resumed his work at the Carpinteria Lemon Association. It was at that packing house that he met Naomi Robinson of Montecito. They were married at the First Methodist Church of Carpinteria in 1948 and spent 59 loving years together. Lester was hired into the Carpinteria Unified School District as a custodian in 1947, where he worked for 33 years until his retirement in 1981. Lester worked at Carpinteria High School and then Canalino Elementary. He touched many childern’s lives over the years and took great pride in maintaining the school grounds. Lester was a strong supporter of Carpinteria Warrior Football. He attended every single home game and traveled to their games on the road. Lester procured a piece of the goalpost from the teams 1975 CIF Championship and displayed it proudly. He also took part in the dedication of the Carpinteria Memorial Field. Lester was an avid sports fan. He lived for Warrior and USC football. He was a meticulous painter and spent summers putting fresh paint on the local schools. He also loved music and enjoyed singing hymns. His joy for music led him to sing in weddings for many years at their church. Lester had many hobbies but his true passion was for his wife Naomi. He dedicated his life to loving her and his family. He was a wonderful husband and father. He enjoyed spending every possible moment with Naomi. They were dedicated members of Carpinteria Community Church. As Deacons, they attended service together every Sunday. Together they contributed to their community by serving meals on wheels and driving the elderly to church. They were known to walk the streets of Carpinteria early in the mornings.

Lester Raymond Koehler, 94, of Carpinteria, passed away in his home on February 1. Lester is survived by his two daughters Carol McClellan of Newbury Park, California and Marjorie Binns of Hutto, Texas; a sister, Katherine Coates, of Paradise,... View Obituary & Service Information

The family of Lester Raymond Koehler created this Life Tributes page to make it easy to share your memories.

Lester Raymond Koehler, 94, of Carpinteria, passed away in his...